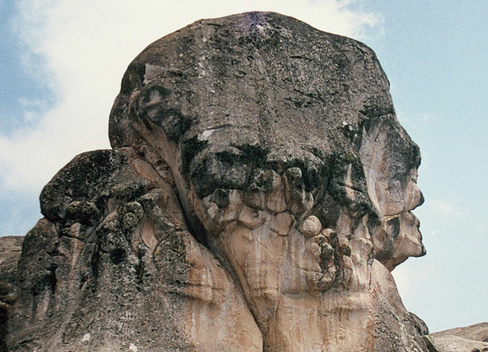 High in the Andes Mountains on a plateau just east of Lima, Peru, can be found a “forest” of giant granite rocks seemingly cut or worn into hundreds of shapes that look like human faces, animals and even religious symbols.

The shapes at the site, known as Marcahuasi by the natives, are so vague that it is difficult to determine if they were accidentally formed by acts of nature or if they were once distinctly cut in the stone some millions of years in the past by an ancient civilization.

That one stone resembles the Sphinx of Egypt and another lies face up and looks much like the “face on Mars” adds even more demur amid suggestions that the rocks are natural formations.

There also exist over 50 small stone buildings, also worn with age. Some have very small doorways measuring no more than three feet in height.

Anthropologist and Geologist Dr. Robert M. Schoch, who has researched famous megalithic sites around the world, describes Marcahuasi as “one of the quintessential high holy spots on Earth."

That’s because natives and even professional researchers sense something metaphysical about the place. Daniel Ruzo, a Peruvian explorer, believes the rocks were cut by a previous humanity that lived on Earth long before our civilization arrived. The natives perceive a vortex leading into an inter-dimensional door to another world.

Rozo notes that the Hopi people in North America tell how their ancestors came to Earth through a door from earlier worlds where they reached various degrees of developmental sophistication.

Dr. Raul Rios Centeno, who investigates stories of the unexplained in Peru, tells about a patient who came to see him after apparently getting caught between two dimensions while camping at Marcahuasi.

The woman said she was exploring one night and came upon a torch-lit stone cabin and heard music coming from the inside. She was curious and looked inside the door where she saw people dressed in Seventh Century clothes all dancing. She was partly in the door when a friend pulled her back outside again. The illusion of music and the party disappeared the moment she was pulled from the building but she found the side of her body that had entered the cabin was now paralyzed.

Centeno said he believes the woman experienced part of a dimensional shift that changed the energy flow of her nervous system. In other words, part of her was left in another dimension at the instant she was pulled back into this one.
​
One writer summed up the Markawasi story: “There are many ways to describe it: in terms of a power point or power place, a center of power, an Earth vortex, a chakra point of the living Gaia, or a congruence of planetary leys or ley lines. No matter what words are used in an attempt to express the nature of Markawasi, they will never do it full justice. The ineffable aspect of the plateau must be experienced.”