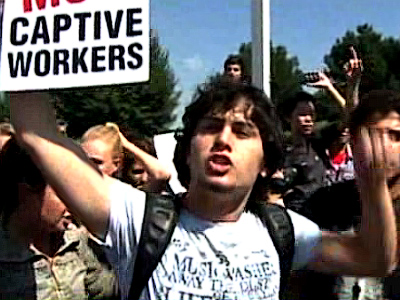 Imagine A World Without Slavery

Slavery has been a way of life on Earth for as long as humans have recorded history. It has appeared in many forms . . . from the concept of one man owning another to serfdom under the rule of kings and assembly line workers laboring for whatever the employer chooses to pay.

Existence under slavery has always meant a life of hard labor and drudgery. Workers are owned by the master in one way or another. When jobs are plentiful and there is competition for skilled labor, workers can choose where they will work. But they always must work to live.

There has always been a quest for freedom. The founders of the United States declared their new nation "the land of the free." That slogan has remained with us, even appearing in the lyrics of the National Anthem. Americans consider themselve’s free, but free of what? They have been relatively free of tyranny and after a bloody fight to gain the right to have collective bargaining at the work place they gained such extra things as paid health care, paid vacation time and paid sick time. They bargained for five-day work weeks and eight-hour work days. And child labor laws stopped employers from working children in their sweat shops.

But they always had to return to that grueling place on the assembly line, or at a desk in front of a computer, spending eight long hours of monotonously doing the same thing day in and day out just to earn what they need to pay the rent, buy food for the family, and keep the family car on the road so they can get to and from their jobs.

Were we always destined to live on this planet by the sweat of our brow? The Book of Genesis suggests a time when humans lived free in a plush garden where the climate was temperate and food was plentiful on trees and vines. But because of his "sinful nature," Adam and Eve disobeyed the Creator’s order not to eat fruit from the Tree of Life. The moment they ate of this fruit they were filled with wisdom.

As the tempting serpent described it: "Your eyes will be opened, and you will be like God, knowing good from evil."

Because they chose to turn from innocence and total dependence on the Creator, the Hebrew story says humanity was cursed to "live by the sweat of your brow" all the days of our lives.

The verse reads: "Cursed is the ground because of you; through painful toil you will eat of it all the days of your life. It will produce thorns and thistles for you and you will eat the plants of the field by the sweat of your brow."

Now that is a really severe curse from a God that is supposed to love us and provide for his creation. And according to the story, it happened because this God placed two innocents in a beautiful garden with nothing to do with themselves except lie around, feed on the fruit of the land, and contemplate what would happen if they dared to eat the fruit of the forbidden tree planted in the center of their garden. We all know it was only going to be a matter of time before they dared each other to sample that forbidden fruit.

Thus it is obvious that if the Genesis story contains an ounce of truth, mankind was set up to fail from the start.

While we allegedly began our existence on this planet in a free state, the work of just staying alive has always been difficult. Seasonal changes, biting insects and storms meant we needed to find ways to cover our bodies and build shelters from the storms. We had to learn to either hunt or grow our food. Living as hunters and farmers has always involved hard work. But even in that state, there was a form of freedom of choice. Early humans wandered the globe looking for better climates, richer soil, and greener grass.

Eventually we developed a system of community living and working collectively to produce the food, building materials and clothing to meet our basic needs. This has been refined over the years until we came to the point we are at today, but because we invented money, we are caught up in constant conflict between the employers and the workers over the issue of distribution of the wealth.

Writer Nina Powers for the Guardian recently suggested that the concept of work may soon be considered obsolete. How can she come to this radical conclusion?

She wrote: "as wages bear less and less relation to the cost of living, it seems as good a time as any to ask if the underlying fantasy is that employers will one day be able to pay their workers nothing at all because all those issues like housing, food, clothing, childcare will be dealt with in another mysterious way."

Whether Powers was writing with tongue-in-cheek, she brings forth an interesting question. She wrote: "Some discussions at Occupy focused on what an anti-work politics might mean, and campaigns not only for a living wage but for a guaranteed, non-means-tested "citizen’s income" are gathering pace.

"As what it means to work becomes both more obscure and increasingly desperate, (now) might be the perfect time to ask what work is, what it means, and what it might mean to live without it."

Unfortunately, existing without money involves creativity, careful thought and usually lots of hard labor. People barter tasks for food and goods. They "dumpster dive" behind restaurants and food stores for meals. They garden on public lands for produce. And when all else fails, they steal.

During the harsh winter months the homeless find shelter in underground tunnels or they walk the streets all night and find libraries or other heated public buildings where they can find quiet corners to sleep during the day. They wash up in public restrooms. They find shelter in tents when they can find places to pitch them.

Unless born into royalty or wealth, people cannot escape having to labor in some way to meet those daily needs. It is not because of a curse from God because of our sinful nature. It is simply a fact of life. With the advent of robotics, computers and electronic household and industrial gadgetry, we have found ways to make those daily chores less of a burden, but if we lack the means to buy these wonderful things, there can be no escape from the daily toil of staying alive.

The best way to deal with the work laid out before us is to plunge into it each day with a smile and glad heart, knowing that each day we live is a marvel. Working together with our friends and neighbors should be considered a happy time of sharing and camaraderie.
If we must work for wages, there are kind employers and unscrupulous ones. Most of us who have been in the work force for a few years have experienced both kinds. When blessed with work we enjoy doing, and doing it for a kind boss, life can be exceptionally good even if the wages are minimal.

The secret is to find employment doing something that we really enjoy doing. In my case my vocation was writing. I liked what I did so much, especially when working under an editor I really liked, there were days when I felt guilty taking money for doing it. Every day was an adventure; a new experience.

Wouldn’t it be a grand world if everybody could see their jobs in the same way I did?