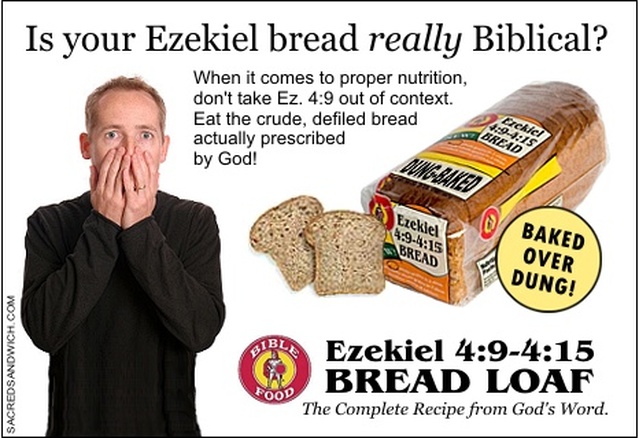 There has been a special Barley bread known to the Israelites for thousands of years. It is known as Ezekiel Bread, Barley Bread, and sometimes it is called Ezekiel 4:9-12 Bread when and if you see it on store shelves. And some stores actually carry it.

Anyone who has tried Ezekiel Bread will tell you with no uncertain terms that it is a very unpleasant bread to eat. It tastes just terrible. And the bread they are talking about very likely lacks one important ingredient . . . a mixture with human feces.

So why would such a terrible bread exist, what was its origin, and why has it remained on the Jewish menu for all these years? Those are questions only people of the Hebrew faith may be able to answer. The recipe can be found in the Old Testament in the Book of Ezekiel, and as the story is told, it was given directly to the prophet Ezekiel from God. So the Jewish people obviously perceive something holy about this horrible bread.

Could it be penitence for sin? Only those that choose to consume it know.
Here is the story behind this strange recipe and how it came to be that God gave it to Ezekiel.

It seems that the Israelis were living in sin and God called upon Ezekiel to prepare a siege of Jerusalem as punishment. But the actual siege was symbolized in miniature. Ezekiel was told to draw the image the City of Jerusalem on a block of clay, and then set up a tiny camp, complete with ramps, battering rams and everything but toy soldiers around it.

God told Ezekiel to “take an iron pan, place it as an iron wall between you and the city and turn your face toward it. It will be under siege, and you shall besiege it. This will be a sign to the people of Israel.

After this, God instructs Ezekiel to flip over on his other side, looking away from the image of Jerusalem, and for the next 40 days bear the sins of the people of Judah.
“I will tie you up with ropes so that you cannot turn from one side to the other until you have finished the days of your siege,” God said.

During this time, Ezekiel was instructed to live on barley bread and water. His instruction: “Take wheat and barley, beans and lintils, millet and spelt; put them in a storage jar and use them to make bread for yourself. You are to eat it during the 390 days you lie on your side. Weigh out twenty shekels of food to eat each day and eat it at set times. Also measure out a sixth of a hin of water and drink it at set times. Eat the food as you would a loaf of barley bread; bake it in the sight of the people, using human excrement for fuel. In this way the people of Israel will eat defiled food among the nations where I will drive them.”

That was the original recipe. But Ezekiel objected strongly to using human excrement. So God changed the recipe and said he would be allowed to bake the bread over cow dung instead.

Dried cow dung has long been known to be a good source of fuel for heat among the nomadic tribes of the world.