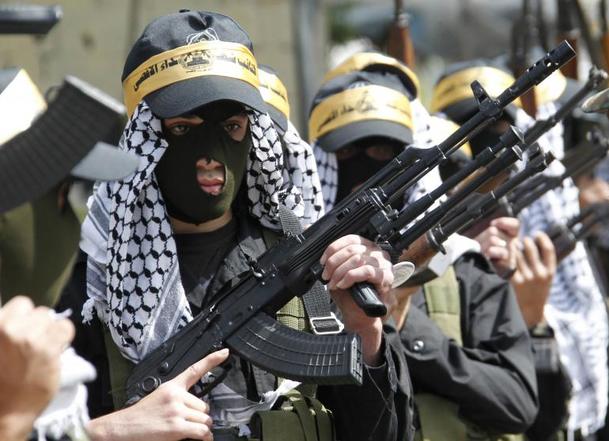 Even before there was the PLO in Palestine, there was a militant organization known as the Fatah. Like the PLO, its original purpose was as a political movement representing the Palestinians in conflicts with the Israelis when it came into existence in 1959.

Fatah, which is an Arabic word signifying "conquer" or "victory," grew from early armed struggles remembered as the 1936-1939 Arab Revolt in Palestine and the 1948 Arab-Israeli War. Its motive was always the liberation of Palestine.

The Fatah movement was founded by professionals working in the Persian Gulf States who had been refugees in Gaza. They included Yasser Arafat, Salah Khalaf, Khalil al-Wazir and Khaled Yashruti. During the 1967 Six-Day War, Fatah joined the Palestine Liberation Organization (PLO). Founder Yasser Arafat became Chairman of the PLO in 1969 and remained spokesman of both organizations until his death in 2004.

While Fatah was part of PLO, there was a unique difference. Fatah began early on as a militant organization. In 1969, the year Arafat took over the group, Fatah carried out 2,432 guerrilla attacks on Israel. They also fired numerous rocket strikes into the occupied West Bank.

In response to the attacks, the Israeli Defense Forces (IDF) planned and carried out a major attack on the Fatah headquarters in Karameh, Jordan. Fatah leaders were forewarned and well prepared. Even though Israeli forces attacked with heavy weaponry, armored vehicles and fighter jets, Fatah held its ground. Then when the Jordanian Army joined the conflict, the Israeli forces retreated rather than become engaged in a full-scale war.

By the late 1960s, Fatah and other Palestinian militants were growing in force and creating what was described as a "state within a state" in Jordan. After the Karameh victory, the Palestinians were setting up roadblocks, molesting women and levying special taxes. By 1970 Jordan’s King Hussein took action. He declared martial law and a small civil war broke out between Jordanian and Fatah forces. Finally Arafat and Hussein agreed to a ceasefire. Two thousand Fatah fighters then moved into Lebanon and set up a new headquarters with Fatah forces already stationed there.

During this period a Fatah splinter group known as the Black September Organization was providing training to various insurgent groups from Europe, the Middle East, Asia and Africa. These groups began carrying out attacks against Israeli targets in the 1970s. The attacks became very sophisticated and included civilian aircraft hijackings and terrorist attacks. By this time Fatah was receiving weapons, explosives and training from the Soviet Union, China, Algeria and some Communist East European states.

The story of the Fatah gets complicated after the organization got involved in the Lebanese Civil War. This war lasted 15 years and involved about seven different terrorist organizations fighting each other. It was triggered after a Christian militia group known as the Maronite Phalangists killed 26 Fatah trainees on a bus in 1975, then attacked a Palestinian refugee camp at Karantina, killing over 1,000 civilians. The PLO and the Nasserist Lebanese National Movement retaliated and hit the Phalangist stronghold at Damour, leaving 684 civilians dead. The fighting got really ugly after that.

After the late 1970s, PLO and Fatah cross-border raids against Israel began occurring more and more frequently. One especially brutal attack, known as the Coastal Road massacre, involved the hhijacking of a bus on the road connecting Haifa and Tel Aviv. The terrorists sprayed gunfire into the bus and at passing vehicles. In the end 37 civilians were killed. The Israeli Army countered and attacked the PLO camps in Southern Lebanon. The Fatah moved into Beirut.

After Israel invaded Beirut in 1982, the US and European governments brokered an agreement giving Arafat and Fatah safe passage to Tunis where they were exiled by a multinational force.

In spite of this, Fatah remained an elected power in the Palestinian government. Then in 2005 elections, Hamas, a newer and perhaps even more militant organization, won enough seats that they now control the government. Arafat’s death clearly had an effect on Fatah.

Fatah held its first general assembly in 20 years in Bethlehem, West Bank, in August, 2009. More than 2,000 delegates attended the three-day meeting. Another 400 were blocked by Hamas which prevented them from traveling from the Gaza Strip to the West Bank.

Jordan’s King Abdullah was among the main speakers at the assembly. He warned Fatah delegates that divisions among the Palestinians were more destructive to their cause than the Israeli "enemy."

The delegates agreed not to resume Israeli-Palestinian peace talks until all Palestinian prisoners were released from Israeli jails, all Israeli settlement construction was stopped, and the Gaza blockade preventing free travel between the Gaza Strip and West Bank was lifted.

It is interesting to note that Fatah is no longer considered a terrorist organization by the United States government.