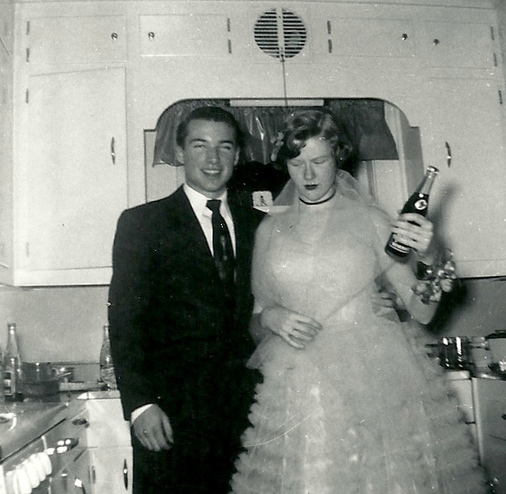 The year I joined the high school band and got moved into the percussion section, I played snare drum next to another drummer named Susan Philbrick. Susan was a thin red-headed girl from the lower grades who had a bundle of energy and took an obvious interest in me. I had little experience with “girl friends” in those days and suppose I was flattered by the attention. It was not long before we were a couple.

Because we were in the band we were together a lot. We were present at every athletic event and eventually found time to be together after school and on our time away from school. Her father, Paul Philbrick and I sang in the Methodist Church choir and men’s quartet together. Paul and my father worked together at the plant. It was not long before I was invited to the Philbrick home after church for Sunday dinners.

I was driving by then so Susan and I had a few dates together. I remember parking and kissing her in the dark. I distinctly remember the day we jumped in the hay in the barn on the farm. She was my date to the high school prom that year. Beyond that, my memories of Susan are all but faded in the dust of time.

She was an outspoken girl who always had funny things to say. I can still remember her voice and the way she liked to strut in her band uniform when we were on parade. I don't remember how we broke up. I still have fond thoughts of her so I don't think it was a hurtful breakup.

Many years later when I was working as a news bureau reporter for the Times Herald in Port Huron, I was in Harbor Beach covering the moving of the former Philbrick house from its location on Huron Avenue south to a new site along the Lake Huron shoreline. The house had to be moved to make room for a hospital expansion and Judge James Lincoln, a former Harbor Beach native serving on the bench in Detroit, bought and moved it for use as a retirement home.

Even later, when Lincoln and I colaborated in researching and writing the book Fiery Trial, about a forest fire that swept the Thumb Area of Michigan, we sat in that same living room where Susan and I had spent our Sunday afternoons. It seemed strange to be working with Judge Lincoln in that room. It stirred so many fond memories linked to my youth.

The Philbricks moved to Midland and I went off to college. I received word after that that Susan committed suicide.