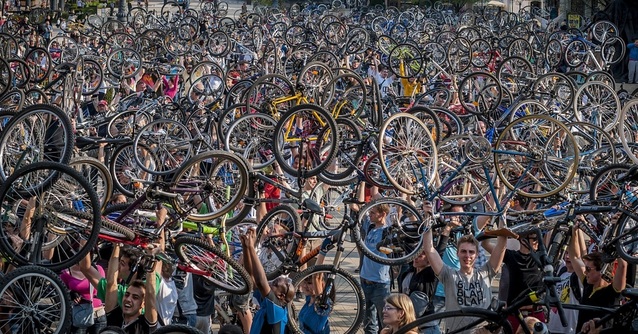 The Threat Of Critical Mass

Since entering the atomic age the concept of critical mass has become part of our vocabulary.

In atomic fusion, we are talking about a buildup of heat from the splitting of supercharged atoms that explode after reaching a state of critical mass. And admittedly this is a crude explanation of something that I know little about.

Now the mystics have developed a theory of critical mass linked to a belief in the evolution of human consciousness. With billions of humans all using their minds at the same time, they are tapping in and being influenced by a central information library called the collective unconsciousness.

In contemporary scientific terminology, this phenomenon is called "thought contagion" resulting from "morphic resonance of the group mind." British author Dr. Rupert Sheldrake, theorizes that this resonance is "a nonmaterial organizing collective memory field that affects all biological systems. This field can be envisioned as a hyper spatial information reservoir that brims and spills over into a much larger region of influence when critical mass is reached."

The optimists within esoteric circles believe that humans are evolving with the help of the critical mass of enlightenment. The theory is that a certain number of "awakened" human beings can initiate "a significant shift in global consciousness." The result is a fusion of awakening among others until the entire planet is filled with enriched humans, their brains working collectively for the good of all.

Unfortunately, I don't see this happening. There seems to be a general dumbing down of people all over the world. The willingness of the American public to blindly follow a mediocre, not-too-bright president into a military assault against a small country like Iraq was a good example of what I am talking about.

The world unquestionably accepted the Bush reasoning for such an attack, that the little dictator there was storing "weapons of mass destruction," even though it was a very lame excuse. Especially after a skilled inspection team spent weeks scouring the country and found no evidence of such weapons. And now, after bombing Iraq into the Stone Age, and still being unable to prove such claims, the general public appears unwilling to hold Mr. Bush accountable for his actions. If anything, his popularity as a "leader" has actually risen since leaving office.

It strikes me that there might be a hidden agenda behind the mass killing of so many innocent people in both Iraq and Afghanistan, since the Bush War Against Terror was launched in 2001. It may have something to do with a probability that people all over the world are growing dumber and dumber by the day.

Even more disconcerting is the recent election of an even more dangerous person to fill the role of the nation's leader. The outcome of this new administration is yet to be determined.

With more than seven billion humans existing on this planet, and the numbers growing expediently by the hour, there is more information being transmitted through the collective now than ever before in history.

I find it extremely troublesome that, instead of evolving into something superior, the human race seems to be de-evolving into a state of almost animal behavior. It is almost as if the uneducated masses are feeding so much stupidity into the collective, it is dragging down the ability of everybody else to think.
​
A good example of how the collective influences thought patterns is found in a mythological phenomenon known as the 100th Monkey Effect. As the story is told, a group of Japanese monkeys created the critical mass needed to teach the species a new behavior. It began with the washing of sweet potatoes by the children of the monkey tribe. The behavior was expanded into the older generation of monkeys that also began washing sweet potatoes. The knowledge spread slowly, but when a certain number of monkeys knew this behavior, the 100th monkey, suddenly the phenomena spread to all the animals. The behavior was adopted throughout the species, even among monkeys that were many miles away and had no contact with this tribe.

While the story appears to be a fabrication, it demonstrates the effect human thinking seems to have on one another. It has been shown that a collective unconscious stream of information does exist and that all humans possess the ability to tap into this rich resource of knowledge.

And therein lies the crisis faced by the human race today. We have obviously populated the planet to a point of critical mass, or at least gotten so close to that number that the weak minded are already being influenced by the thought patterns of the majority. If we allow ourselves to reach that unknown number . . . the 100th Monkey Effect cold grip the minds of everyone. It is conceivable that we, as a race, could, through sheer numbers, fall back to simple left-brain thought. We could be no more than a world of robots without purpose.

This leads me to think that the actions of a few world leaders . . . while giving the appearance of total stupidity . . . might have cause. Someone, I hope wiser and smarter than George W. Bush may be pulling strings to make the puppets jump. If my theory is right, Bush, Trump and those lame-brained Congressional leaders that followed them into office, are being allowed to lead the world right into the apocalypse for good cause. My fear is that if we fail to enlighten billions of the stupid people soon, mankind will perish with our overheated, overpopulated, over-polluted and dying planet.