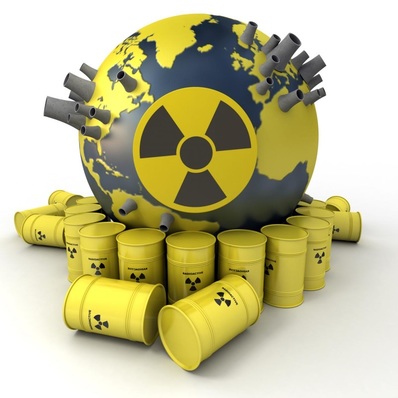 Recycled Radioactive Waste In Our Homes

If you have purchased something "new" for your home recently, it might be a good idea to have a geiger counter handy. It appears that many of the household products we are buying are being manufactured from the tons of radioactive waste that have been piling up since we began manufacturing atomic bombs and building nuclear powered ships and electric generating plants.

It has been no secret that uranium laced metals were used in the bombs and bullets fired by allied forces at Iraq and Afghanistan since President Bush and his gang launched those malicious and unnecessary wars over a decade ago. And now we are reading horror stories of newborn babies born with terrible birth defects and a rise in cancer among the natives who must live on that contaminated land.

Now we are learning that industrial plants in China, India and numerous other nations are using radiated metals to manufacture a variety of the household products we are buying at Walmart and other American retail stores, and the U.S. Department of Energy was at one time recommending legislation to allow American factories to do the same.

Radioactive metals are being found in everything from ladies handbags, zippers, metal eyeglass frames, kitchen pots and pans and even joint repacement parts. In Taiwan a study revealed that people living in flats built with radioactive reinforcing steel between 1983 and 2005 had significantly higher rates of leukemia and breast cancer.

Obviously this deception has been going on now for a very long time. Since the United States has entered into free trade agreements with China, India and the other nations where radioactive metals are being used to manufacture goods, the chances are very high that these dangerous products have found their way into our homes as well.

And if the U.S. Department of Energy (DOE) had gotten its way in 2013, the situation could have been made worse. The DOE was proposing legislation that would lift a restriction on the release of scrap metal originating from radiological production for the purpose of recycling. If approved, an estimated 14,000 tons of radioactive metal would have been recycled for use in manufacturing consumer products in the United States.

The DOE argued in its draft proposal that releasing this toxic material would be a benefit to the environment because it would reduce the need for mining and refining the metals, thus saving the use of large amounts of water and power for smelting.

Fortunately, as far as we can learn, Washington legislators chose not to accept the DOE plan. But that has not eased the ongoing threat in the products Americans are buying every day.

The accumulation of literally millions of tons of this radioactive waste has been a growing problem all over the world. Nobody has figured out a way to dispose of it other than finding some vacant, uninhabited plot of land and turning it into a radioactive waste dump site. And no nation has agreed to allow such a site to exist in its back yard. That is because waste from uranium and other nuclear ingredients remains highly dangerous for thousands of years.

Since we first began manufacturing nuclear bombs and building nuclear powered ships and power plants, the tons of radioactively contaminated scrap has been piling up. One very bad idea was to dig a massive hole under Yucca Mountain, an allegedly dormant volcano in Nevada, and put it there.

Other sources of radioactive waste now is coming from the medical industry. Dental and medical X-rays, mammograms, CAT scans, PET scas, radio-isotope "seeds," food irradiation, daily release of radioactive gas and water from the many operating nuclear power reactors, those body X-rays at airports and accidental releases like the ones at Fukushima and Chernobyl have all added to the ever growing mass of toxic materials that nobody wants.

The worst thing we can do with it is allow unscrupulous big corporations to recycle this stuff for building houses and office buildings, and making household items that will expose more and more people to increased levels of radiation. We have no doubt that they would do it if there was a profit to be made. And we suspect that it has already been happening.
​
We propose portable geiger counters to use when we go shopping for anything made of metal.