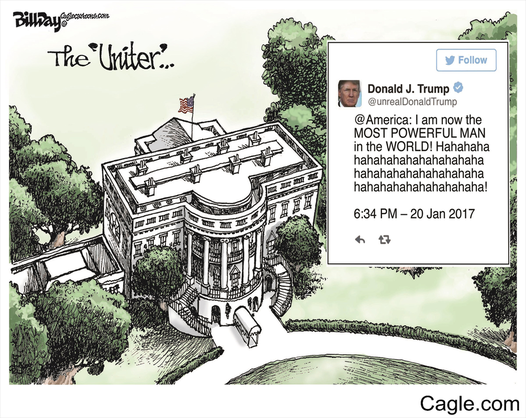 In all of my years that I have covered local and national elections as a newspaper reporter I have never experienced a presidential inauguration quite like the one that is about to occur today. It has always been a day of celebration; a time of change and national reflection. It is a time when the leadership of the nation shifts and a new president, a person chosen by a majority of the voting public, comes to power.

Inauguration Day is always treated somewhat like a national holiday. There are speeches, parties, music and the newly elected President and First Lady are special guests at elaborate parties and dances going on all over Washington.

The inauguration of Donald Trump, however, is not stirring this kind of fervor. While this newly elected president certainly has his supporters, and they will be gathered around him for elaborate celebratory carrying on. His opponents are gathered at the gate. A women’s demonstration of protest will be going on elsewhere in town (it was prohibited from using the White House grounds). That movement has gained so much national momentum that similar protest demonstrations, not necessarily by women, are planned in front of county courthouses all across the country.

Because of his controversial rhetoric, his refusal to follow the established liturgy used by newly elected leadership since the nation’s origins, and his strange picks of military and corporate power figures to hold key cabinet posts, there is a fear among voters that Trump has been the wrong choice. To many it looks like a corporate take-over of our government by a gang of organized criminals in suits.

The public is basically taken aghast at what is occurring before their eyes as this wild little stocky billionaire with a flashing splash of blonde hair tweets orders to political and military leadership from his luxury suite atop an elaborate hotel he constructed within sight of the White House.

The media cartoonists are having a field day drawing mocking images of Trump and displaying him as a clown and a person not to be taken seriously. Magazine covers are featuring amusing images of “The Donald” that are robbing him of the respect and dignity a president-elect should be receiving.

Many elected Democratic national representatives and senators say they are refusing to attend the inauguration. There is a question whether the living past presidents are going to be among the noted people staying away from this event.
Organizers of the inauguration ceremony had difficulty getting name musicians and performers to help put on the traditional entertainment.

It may not be a positive first day in the Trump presidency. The entire world is watching fearfully to see what this man, an extreme right-wing Republican backed by a Republican controlled house and senate, is going to do next.

We appear to have a baboon now in control of the most powerful nation in the world. A lot of Americans are shaking their heads and wondering just how this could have happened.