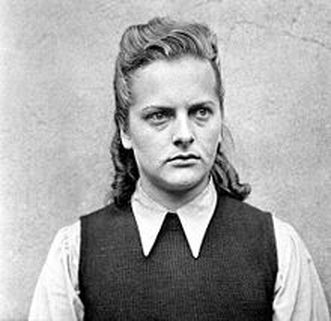 Irma Grese was a blonde German farm laborer who had dreams of someday becoming a movie star. But after hooking up with the Nazi SS at the age of 19 and becoming a guard at the notorious prison camps Auschwitz, Ravensbruck and Bergen-Belsen, she earned her fame as a mass killer, torturer and seducer of the Nazi officers.

Survivor Olga Lengyel, in her published memoir Five Chimneys, told how Grese and Elisabeth Hasse, both SS Aufseherin in rank, shared the job of selecting women for the gas chambers.

Lengyel wrote how Grese practiced meticulous grooming, wore custom fitted cloths and laced herself with perfume before appearing among the ragged women prisoners. She was always visibly pleased when she could instill terror among the women at roll call. Lengyel said Grese picked women who “retained vestiges of her former beauty” plus the sick and weak for death chambers.

In her book Lengyel noted that Grese took several lovers among the SS in the camp, including Josef Mengele. When she became pregnant, Grese forced an inmate surgeon at the infirmary into performing an abortion, something even the Nazis rated as an illegal and “unchristian” act.

Grese flaunted her looks and boasted about plans to pursue a career in the movies after the war.

Other survivors at Bergen-Belsen testified during the war crimes trials about Grese’s acts of pure sadism, beatings, attacks by her trained dogs and arbitrary shootings of prisoners. She still enjoyed selecting women for the gas chambers. It was said that she liked to appear in heavy boots and was always armed with a pistol and whip. Sometimes she shot prisoners at random and at other times she used her plaited whip and whipped victims until they were dead. There was a sea of thousands of haunted faces from which to choose.

By the time the Russian Red Army seized Poland in 1945, Grese was serving as warden of the women’s section of Bergen-Belsen.

After the war Grese was among 45 Nazi prisoners tried under British military law in Luneburg for war crimes in the fall of 1945.

During the 53-day trial the media labeled Grese “The Beautiful Beast.” She was among 16 female wardens charged with similar crimes, but Grese was one of only three that were sentenced to death. Eight men also were given the death sentence.
​
All were hung publicly on special gallows on December 13, 1945. Grese was only 22 years old.