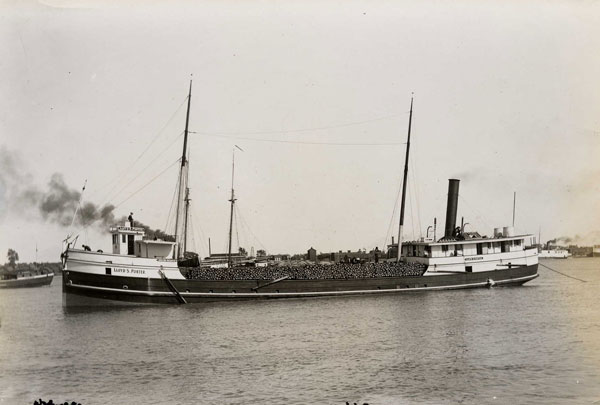 When launched at Port Huron, Michigan in 1893, the wooden hulled steam barge Lloyd S. Porter was designed to be a bulk cargo carrier and nothing more. At 159 feet in length, the Porter was one of a fleet of carriers operating on the Great Lakes in those years that carried lumber, iron ore, coal and other bulk cargoes.
​
The demand for small wooden carriers was high at that time because of the many small lake port towns that could not accommodate larger steel hulled vessels.

The Jenks Shipyard built the Porter, and then an affiliate company, the Jenks Shipping Company operated the vessel as a lumber hooker, often towing a string of barges loaded with lumber.

The Porter was a simple boat, with its forecastle located in the bow, a small pilothouse resting on top of that, and an open bridge. The engine room was in the stern, and the cargo holds were amidships. It was a simple design that was used in building lake freighters for years.

The Porter operated without incident for the first five years, but then it was pressed into ocean service when the Spanish American War broke out. While steaming down the St. Lawrence River, on her way to the open sea, however, the Porter and an up-bound vessel, the steamer Turret Age collided near Ste. Croix, just up river from Quebec. The Porter was struck across her bows and sunk. Only her masts and wheel house were above water. The crew escaped.

A Canadian wrecking company, the Donnelly Wrecking and Salvage Company of Kingston, raised the Porter and towed it to dry-dock where it was rebuilt. At that time the ownership of the Porter went to the Ontario and Quebec Navigation Company Ltd., of Picton, Ontario. The steamer then carried coal for its Canadian owners for the next 12 years.
​
It was on October 13, 1912, that the Porter got in trouble a second time. She was down-bound on Lake Erie, laden with coal, and towing the schooner barge Marengo, when the two vessels ran aground in heavy fog on Morgan’s Point, just off Port Colborne. The Porter was successfully re-floated and sustained no serious damage. But the Marengo was wrecked in heavy seas before salvagers could free it.

The Ontario and Quebec Navigation Company was purchased by a Toronto syndicate and later absorbed into the new Canada Transportation Company in 1913. That company then became the Canada Steamship Lines. The little Porter, now an aging steamer, became part of that Canadian fleet.

That ownership did not last long. On September 13 of that same year, the Porter and the bulk carrier Fairfax collided head-on while navigating the Welland Canal. The Porter was down-bound at the time, bound for Montreal with another load of coal, and it sank in the canal. The Fairfax took severe bow damage but remained afloat.

Probably because it was an obstacle in a busy canal, the Reid Wrecking Company of Sarnia was brought to the scene. The old Porter was raised and once again taken to dry-dock for repairs and an extensive refit. This time it returned to service under the ownership of the Sincennes-McNaughton Line of Montreal. And the Porter continued carrying coal as part of what was nick-named the Sin-Mac fleet.

The Porter’s 25-year career on the lakes came to a dramatic end on May 10, 1017, when it burned while docked at a coal trestle at North Fairhaven, New York. The Porter took fire while loading coal. The fire spread to another wooden steam barge, the Congercoal, which was moored along-side. Both vessels were destroyed.