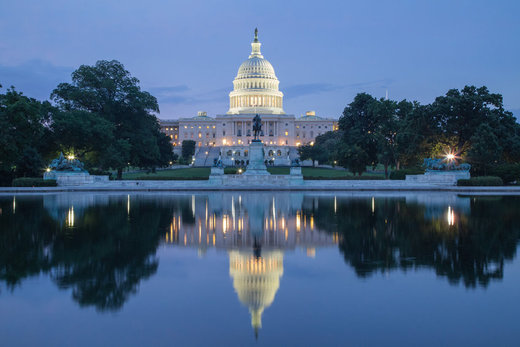 Our Sinking Capital
Lawmakers Forced To Deal With Climate Change

The elected lawmakers in Washington have been going out of their way to avoid talking about climate change in their campaigns for office. Instead of joining the other nations of the world in taking action, Congress has been attempting to block the steps the Environmental Protection Agency has taken to address planet-warming emissions.

During the campaign for the 2016 presidential job, most Republican candidates deny that human activity is causing climate change. They accuse anyone who says it as being “alarmists.”

The subject of global warming is a hot-button issue because the carbon fuel industries are pumping bundles of money into their campaigns. The Republican controlled Congress also has established a gridlock over everything President Obama, a Democrat and the first elected black president to live in the White House, has attempted to accomplish.

No matter what big oil and big coal, the automakers and electric power companies are demanding, federal legislators will not be able to ignore this issue much longer. Even if they ignore public opinion, Mother Nature is getting involved . . . and in a big way.

A lot of us were secretly glad when winter storm Jonah slammed Washington D.C. with a full-scale blizzard, shutting the entire East Coast down for about three days. It was one of the worst winter storms to hit the area in years and weather forecasters say it probably won’t be the last. We hoped the storm would help jar our legislators into wanting to deal with this critical environmental issue.

Then there was Superstorm Sandy, a Category 3 hurricane that swept the Atlantic Coast from Florida to Maine in 2012, causing an estimated $75 billion in damage. The storm swept Washington D.C. closing government offices for two days.

That’s just the regular dramatic weather events that are beginning to occur in and around the nation’s capital. But there is something even more drastic on the horizon. It seems that because of rising sea levels and a peculiar settling of the land, Washington D.C. is sinking into the ocean.

A recent story by Kate Sheppard, environment editor for the Huffington Post, noted that research by the U.S. Geological Survey calculates that the land under Washington is dropping and is expected to fall at least another six inches in the next century. This has been going on since the glaciers retreated at the end of the ice age some 20,000 years ago. The lifting of the weight of the ice north of Chesapeake Bay is causing the land there to rise, and the land under D.C. to drop.

In addition to that, the rising sea levels caused by melting ice sheets and the thermal expansion of the oceans is expected to cause global sea levels to rise as much as four feet worldwide. But in the Chesapeake Bay region, tidal records show that the relative sea level rise is happening twice as fast as global averages, Sheppard wrote. That means the entire area under the Nation’s Capital is destined to flood.

Just how fast that happens and what can be done about it is going to depend upon decisions made by elected legislators in the next few years.

“It’s ironic that the nation’s capital – the place least responsive to the dangers of climate change – is sitting in one of the worst spots it could be in terms of this land subsidence,” geologist Paul Bierman was quoted as saying in the Sheppard story.
​
The study was published in the journal Geological Society of America Today. The research was led by Ben DeJong, a doctoral student at Rubenstein School of Environment and Natural Resources, Vermont.