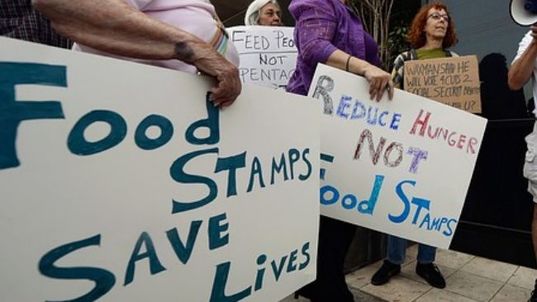 With nearly 30 million U.S. citizens out of work and the numbers of unemployed now reaching levels equal to the Great Depression, it is a shock to realize that a welfare reform law signed by President Bill Clinton in 1996 is blocking many long-term unemployed folks from eligibility for food stamps.

What is happening is that U.S. companies are finding ways to cut costs of doing business, either by moving overseas in search of cheaper labor, or by doing manipulative tricks like hiring part-time workers at starting salaries and escaping the cost of paying for job benefits like health insurance or vacation, holiday and sick-time pay. Some companies are exploring with robotics to replace workers that perform perfunctory tasks. This means that the corporate world has no intention of putting these people back to work.

A recent report to the Senate Budget Committee revealed that one in four of the nation’s most eligible workers are currently out of work, most of them because they cannot find work. Those that are working are not earning enough to provide for themselves and their families. Consequently many workers are living homeless, or cramped up in a sub-leased situation with other low-wage workers like themselves.

With food prices rising, a standard fare at mealtime is bread, pasta, beans and rice. Fresh fruit is a special treat. Americans are turning to the food shared by the poverty stricken people all around the world. This is happening while the great wealth of the world is being held and coveted by a small minority with their hands on the controls.

As stated in our report on U.S. poverty one week ago, the only thing preventing the nation from noticing the impact of this state of depression is the social assistance programs like food stamps, unemployment benefits and welfare that were instituted during the Roosevelt years as the nation was clawing its way out of the Great Depression. We also have an active military which is busy fighting unnecessary and unprovoked warfare around the world, but keeping the youth of the nation employed and living a life of servitude.

You can imagine our horror last week when we heard and watched portions of a dialogue between President Bill Clinton and protesters that showed up at a political rally in Philadelphia. The protesters were complaining about policies adopted by his administration that have impacted the black community. One of those policies has opened the door for states to shut off food stamps after three months to unemployed workers without children.

Nearly two dozen states have just opted to take advantage of the Clinton program and cut off food stamps to these workers. As states struggle with local budgets, we might expect even more of them to jump on this option in the so-called “welfare reform law.”

As of this week an estimated tens of thousands of Americans are losing food stamp benefits. The Center of Budget has estimated that the state cuts may eventually affect up to a million. Making the situation even worse, church food banks and other hunger-relief groups say they are stretched to meet the growing demand. The other factor in this horror situation is that because of climate change and growing corporate farming practices, the price of food is climbing.

To be fair, at the time the welfare reform law was passed by the legislature and Clinton signed it into law, the economy was booming and the odds were much better that unemployed workers could find some kind of labor and keep a job long enough to qualify for food stamps if the job ended.

The crux of the problem was that the law transformed a federal program that assisted the poor into a state-controlled program with limited funds.
​
The GOP/Teabag controlled House and Senate seems to be in no mood to approve new legislation this year to fix this food stamp snafu. It now appears that the only hope for the nation’s poverty-stricken multitudes is a political metamorphosis among voters in November.