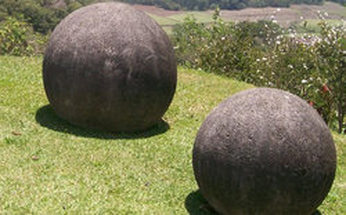 While they are included among the great world mysteries, I have refrained from writing about the large round stone balls discovered in the jungles of Costa Rica. That is largely because there is nothing further known about the balls except that they exist . . . an estimated 300 of them.

The perplexing thing about these balls is that they have obviously been carved from solid rock and then moved from their place of origin to various points on the Diquis Delta and on Isla del Cano, an island located on the Pacific side of Costa Rica.

The stone balls are almost perfectly round in shape and in different sizes, some weighing up to 15 tons. They are estimated to be hundreds if not thousands of years old. There is no native mythology to explain their origin. And every archaeologist, historian and researcher that has visited the site and studied the balls is totally perplexed as to their origin, or how people of an ancient time managed to cut and move such massive stone objects. Or cut them with such perfection.

The other question is why.

The balls have been found in various sites, none of them apparently connected to one another. They are found in various sizes. Researchers suggest they were created between 600 and 1,000 years ago, before the Spanish conquest, which may have destroyed any chance of tracing the culture that produced them.

The first spheres were discovered by workers for the United Fruit Company who were using bulldozers to clear the jungle for a banana plantation. The balls were just pushed aside with heavy equipment that left many of the balls cracked and broken. Some workers even drilled holes in the spheres and used dynamite to blow them apart in search of anything valuable that might be found inside. All they found, of course, was solid rock.

After this, people of Costa Rica began moving the balls for use as lawn ornaments. Nobody thought about archaeological research as to their origin until Doris Stone, daughter of a United Fruit executive, began a scientific investigation. Her reports were published in American Antiquity magazine in 1943.

Since then, Samuel Lothrop of the Peabody Museum, Harvard University and other research teams have visited the sites, located all of the existing balls, and attempted to even repair the balls that were damaged.

The balls are now protected as a Unesco World Heritage Site.

But the questions have never been answered. No one knows who made the balls, how they did it, how they moved them, and their purpose. All we know is that it took a skilled craftsman to have cut such perfectly round objects out of solid rock, and a lot of power by either people or animals to move the balls around.

That many balls are found on an island only adds to the mystery.

Some suggest UFOs or sky hooks may have been around at the time.