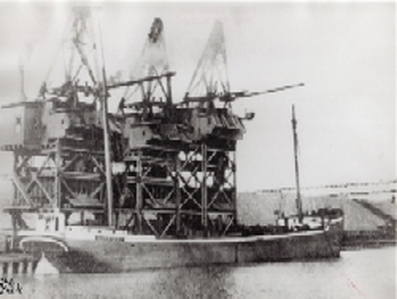 
Fourteen sailors perished when the schooner barges Adriatic and Baltic broke loose from the tug that had them in tow and wrecked during a severe Lake Erie Gale in 1872.

The barges were in a line of vessels in tow behind the tug Moore, believed to have been the William A. Moore that was on the Great Lakes that year. The vessels were all bound for Saginaw, Michigan, which means they were probably involved in carrying lumber to the mills at Tonawanda, New York. They were either returning without cargo, or were laden with coal. That was standard cargo for lumber carriers on return trips from Lake Erie ports.

The date of the tragic incident was September 29.

The Adriatic was a three-mast, 178-foot-long schooner with an interesting history. Launched at Buffalo as a steamer in 1856, the vessel was rebuilt as a schooner before 1860, when it took at least one long ocean voyage. The schooner returned to the lakes in June, 1861, after "a long ocean trade," one news article stated.

The Baltic also began its years on the lakes as a steamship. She was launched at Buffalo in 1847 as a sidewheeler. It was converted to a "side-propeller," which had to have been an experimental project in 1854. This obviously didn’t work so the ship was converted once more to a conventional propeller. By 1865 its machinery was removed and the Baltic was classified as a barge, although it had masts and was rigged as a schooner.

In the midst of the gale the tow line parted, leaving both barges drifting off on their own. Since there were no survivors on either vessel, the details of the disasters that struck them were sketchy. The Adriatic simply foundered and took its seven-member crew to the bottom with it.

The crew of the Baltic was observed attempting to set sail, but the seas overwhelmed the vessel. The crew launched the life boat, but that overturned and all seven sailors drowned.

The Moore and a possible third but unidentified barge survived the storm. An interesting footnote is that the Moore was sunk in a storm on Saginaw Bay in June, 1871, just one year prior to this disaster. She was raised one month later and workers were surprised when she got up steam and made it to Detroit dry dock on its own power.

The Moore was destroyed by fire at Cleveland in 1891.