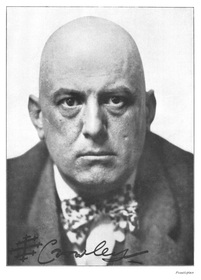 Among the many unsung heroes that walked this planet was the infamous Aleister Crowley whose brilliant accomplishments were successfully blackened by religious propaganda.

Because we have studied and admired Crowley’s work for so many years, it perhaps was a shock to have received an e-mail from a reader who took issue with something once written about him. The woman asked if I “appreciate who this psychopath was? It is remarkable that someone who is apparently intelligent quotes this consumedly evil creature. Perhaps you need to read up on just whom it is you tout.”

I jokingly answered: “the word “tout” means to solicit, and I think this work is improperly used. I admire Crowley’s work. I do not solicit it.” I also noted that “a psychopath is a person with extreme antisocial and/or criminal behavior. Crowley was anything but that.”

Indeed, one can scour the Internet and search the libraries of the world and find lots of books filled with dark and twisted stories about Crowley’s evil links with the Devil. He was once so feared by the church that he was considered “The Wickedest Man In The World.” But if we toss the Christian smear material aside and get to the truth, we find a genius lurking there unlike anything the world has seen either before or since.

During his lifetime, from 1875 until his death in December, 1947, Crowley wrote volumes of books, poems, novels and short articles, mostly about occult matters. His writing is so filled with humor and clever plays on words that his works may someday be considered among the masters of English literature.

Crowley was a world traveler, a yogi, mountain climber, brilliant chess player, painter, astrologer, hedonist, and bisexual. He spent much of his life tortured by respiratory problems, asthma and bronchitis, and became addicted to the only medicines available for treatment in that day, morphine and heroin. Thus he was labeled a drug addict by his enemies.

Born into an ultra conservative Christian family, members of the Exclusive Brethren, Crowley was given the name Edward Alexander Crowley.  His father, Edward, was identified as a “fanatical traveling preacher.” Crowley changed his name in later years because he hated the nickname “Alick.” He chose Aleister because it was the name Alexander in Gaelic.

He also abandoned the church after growing up in a staunch Brethren household. His mother referred to him as “The Beast,” after failing to bring him back into the faith. He later adopted the title and used it in reference to himself in his writings.

The family was wealthy, Crowley’s father owning shares in a lucrative family brewery business, so Crowley was able to attend Trinity College in Cambridge. There he studied philosophy and English literature. Later he became interested in occultism and mysticism and began reading books by alchemists, mystics and magicians. He became heavily involved in several occult organizations including the Golden Dawn, the Silver Star and Ordo Templi Orientis. He traveled the world, studying Eastern Occult systems and Tantric Yoga as well as Buddhism and I Ching.

Crowley’s best known work is Liber AL vel Legis, or the Book of the Law, a brief three-chapter booklet that he said was dictated to him word-by-word by an entity named Aiwass that visited him in a private room in Cairo, Egypt, in 1904. This troubling work, which proclaimed the beginning of a new magical Aeon, became the foundation for Crowley’s new spiritual philosophy that he called Thelema. 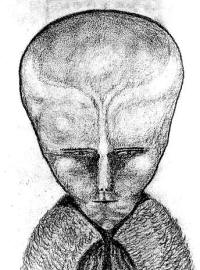 Lam
After receiving the Book of the Law, Crowley declared a new “Equinox of the Gods” but years passed before he came to embrace the writings as a real doctrine of the New Aeon of Horus. Once this happened, Crowley spent the rest of his life studying and writing about this philosophy.

Crowley worked as a spy for British Intelligence in both world wars, something few people know much about. It is said that Hitler’s interest in the occult helped Crowley get into high places of the German government during World War II.
Crowley was so unorthodox in his sexual and magical and occult activities he quickly became known as a black magician and Satanist. He identified himself with the biblical number for the antichrist, 666. He also kept with him various “Scarlet Women,” with whom he practiced sex magic.

One such woman, Roddie Minor, was with Crowley when he conducted experiments in an apartment in New York City that led to a face-to-face meeting with an entity he called “Lam.” His drawing of this entity bears a strong resemblance to the contemporary descriptions of alien contacts known as the grays. Crowley said Lam was of “interdimensional origin.”

When we study Crowley, we see a man who was involved in such a variety of things it is impossible to touch on more than mere highlights in a brief sketch like this. He wrote volumes of material, bored his way into all of the secret societies of the world and then exposed their secrets, despised and openly attacked the Christian church, experimented with sex and drugs to such extremes that his behavior marked him as a fiend, and because he was so intelligent, he mocked most of the people he came in contact with.

Of all the Tarot decks in existence, Crowley’s Troth cards remain among the finest in both art and occult significance in existence.

The chief precept of Thelema is the sovereignty of will. The words “Do what thou wilt shall be the whole of the Law” as proclaimed in the Book of the Law, have become the battle cry of the age.

Yet to understand will, one must also understand the second precept of Thelema which is “Love is the law, love under will.” Crowley believed a person’s will was not merely personal desires, but a sense of destiny or greater purpose. And above all, we must love unconditionally. Crowley considered love as a union of opposites, which was, to him the path to enlightenment.
​
And this, in the end, was perhaps Crowley’s greatest gift to mankind.