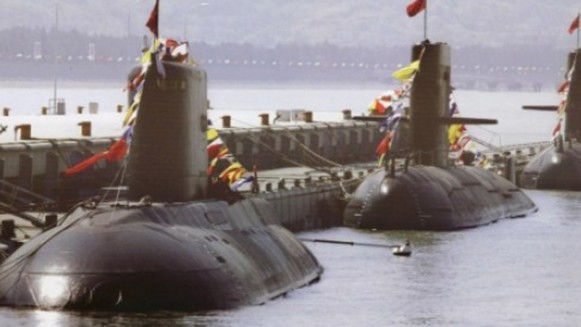 It was in the fall of 2007 that the U. S. Navy, while conducting fleet exercises surrounding the 1,000-foot super carrier USS Kitty Hawk in the Northern Pacific, was dumbstruck when a Chinese Song Class diesel-electric attack submarine surfaced unexpectedly in the midst of a vast naval armada of U. S. ships.

The incident proved to be a major embarrassment for the Pentagon. Somehow the Chinese submarine had managed to slip through the US Navy’s security system and come within range for launching torpedoes or missiles at the carrier. Before this happened, the Americans had no idea that China’s submarine fleet had reached this level of sophistication, or that it posed this level of a threat.

That lone Chinese submarine had blatantly slipped undetected past at least a dozen other American warships, including at least two other submarines, that were surrounding and supposedly screening any possible assault on the Kitty Hawk.

Why would the Chinese navy do such a thing? Some analysts think Beijing was sending a message that its rapidly-growing military and naval power has the capability of threatening any foreign power that attempts to interfere in its back yard.

Indeed, that particular naval exercise may have been construed by China as occurring in its back yard. It happened in the Pacific, somewhere off Taiwan, an island nation that China continues to claim to be part of its own. The message may remain significant today now that President Trump has managed to stir a new possible threat of confrontation between Taiwan and mainland China and the U.S. fleet is challenging the Chinese navy over the right of passage through the China Sea to Japan.

So just how big has China’s submarine fleet become in recent years? Common belief had long been that the People’s Liberation Army Navy’s submarine fleet was confined to 13 Song Class diesel-electric submarines and at least two nuclear-missile launching vessels.

But China has since conducted a public unveiling of its new class of nuclear submarines and has begun to show its muscle as a sea power in the world. The Chinese Navy participated in an attack on pirates operating off the coast of Somalia and in March, 2009, there was a serious confrontation between the Chinese and US Navies in the South China Sea. The latter involved an underwater listening device towed behind the USS Impeccable. China called this a violation of international law because it was done in Chinese jurisdictional waters.

Also in May, 2008, The Daily Telegraph of London published aerial photographs the newspaper claimed showed ongoing construction of a major underground facility on the southern tip of Hainan Island which is designed to harbor nuclear ballistic missile submarines and other warships, including carriers.

“Of even greater concern to the Pentagon are massive tunnel entrances, estimated to be 60 feet high, built into hillsides around the base. Sources fear they could lead to caverns capable of hiding up to 20 nuclear submarines from spy satellites,” the Telegraph story said.

The aerial photographs showed one of China’s newest 094 nuclear submarines among numerous other warships moored at long jettys at the Sanya base.

The story said the US Department of Defense estimated in 2008 that “China will have five 094 nuclear submarines operational by 2010 with each capable of carrying 12 JL-2 nuclear missiles.

At that time the Chinese Navy was estimated to have 225,000 personnel and as many as 70 submarines. Ten of these were believed to be nuclear powered. There were about 72 other combat ships. What more has happened in the past ten years?
​
China has continued to invest heavily in its navy and is quickly becoming a world super power at sea.