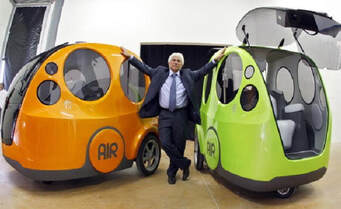 Leave it to human ingenuity to solve the great energy issues when our backs are against the wall. Back yard inventors and a few skilled professionals are coming up with new concepts for heating, generating electricity and driving automobiles even as the world hurls toward climate change, peak oil demand, runaway gasoline prices and exorbitant home heating costs.

We know about wind, water and solar power alternative sources of “renewable energy. From an Internet blog site called EcoGeek we found the following reports.

Engineers in Stockholm, Sweden, devised a way of utilizing the body heat from an estimated 125,000 commuters hustling to and from the Stockholm Central Station each day, to help heat a new office building constructed nearby. The heating system involves a simplistic assembly of pipes that collect the heat and pump it out of the warm train station and into the new office building. The body heat was estimated to provide about 20 percent of the heat for the building.

Finavera Renewables, a Canadian corporation developed a way to harness natural tidal energy from the sea to drive a series of buoy-styled turbines. The company signed a contract with California’s Pacific Gas and Electric to provide electric power for up to 1,500 homes in the San Francisco area. The generators, marketed under the name AquaBuOY, were located in an area 2.5 miles off the shore of Humboldt County. The AquaBuOYs are 40-ton, seventy-five foot tall machines that capture the natural wave action of the sea and turn it into electricity. Finavera claimed that “wave farms” of this type can produce energy at an almost competitive price per watt with coal or natural gas, and up to 13 cents per watt cheaper than current solar and wind technologies.

Then there is something called wave-power. According to Wikipedia, this is a system that uses the natural power of ocean wave action to create energy. In 2000 the world’s first commercial Wave Power Device, the Islay LIMPET, was installed on the coast of Islay, Scotland and connected to the National Grid. In 2008 the first experimental multi-generator wave farm was opened in Portugal. Since then similar wave farm projects have been established in Australia, Sweden, the United Kingdom and the United States.

Then in France, there is the Air Care. It seems that a French Formula One designer devised a way to power cars on the physical energy of compressed air. Prototypes have been successfully developed, and several companies have licensed the technology. The idea is to compress air into ultra-strong tanks in the car. The air is then released through pistons in the engine, which drive the wheels. The current prototypes get just over one horsepower of energy that can push the cars at speeds of up to 70 miles an hour for as much as 120 miles. The nice thing about this car is that it only costs about three dollars to fill up the tank, and the car has no emissions. The only power used is the electricity to operate the air compressor.

Tata Motors, a major automaker in India, announced plans to produce air cars. The company expects to first offer a hybrid version that uses compressed air at slow speeds and switches to gasoline engines for long and faster trips. The projects in India and yet again in Hawaii have been on hold to date because of legal issues.