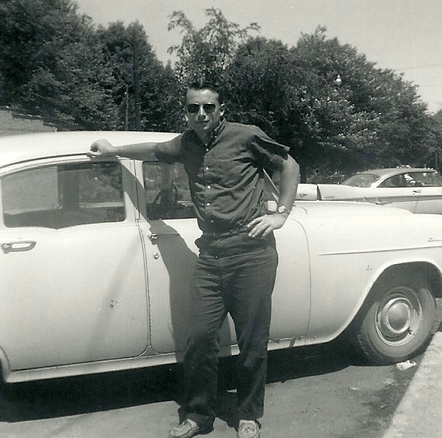 My First Car
Racking Up Miles On Our Cars

I caught a news report a few years ago about cars that easily travel over 100,000 miles and often go twice that distance before they end up in an automobile junk yard.

The story said better engineering, higher performance engines, new synthetic oils and other factors are among the reasons for the longer life of the vehicles on contemporary roads.

I must admit that contemporary vehicles are going the extra distance. One of my last cars was an American made van that traveled well over 200,000 miles and was still going strong. The car I owned before that also traveled that far on the odometer, and I suspect that it was sold to me with a tampered odometer so it may have topped 300,000 miles. My final car had over 150,000 miles on it and I was sure it had that many more miles to go when I let it go.

I am old enough to remember an earlier time when it was considered a milestone when a car reached that 100,000 mile mark. I once stopped along the road and danced a little jig when an Oldsmobile I drove hit that straight zero mark across the dial.

My first car, a 1950 Chevrolet, never made that distance, even though a friend and I tore the engine apart and installed new rings and gave it a complete overhaul at 50,000 miles. The cars I owned for several years after that didn’t get that far either.

Cars in those days were designed like everything else in America . . . to wear out and be thrown away so we would go back to the store and buy new ones. In fact, it was common for people to buy replacement cars every three years and trade their old vehicles in, even if the old car was still running well.

My parents, who lived through the Great Depression, were never ones to waste anything. My father bought very few new cars in his years, and when he did, he drove them until they were completely worn out. I recall once riding with him to an automobile dealership in a car that almost didn’t make it. When he turned the engine off we were 18 miles from home. That was as far as that car was ever going to go. He had to buy another car that day so we could get home again.

I think the Japanese automakers had a lot to do with the design changes in contemporary American automobiles. After those nifty little Toyotas, Nissans, and Mazdas began arriving on the scene, and owners started boasting about getting 200,000 to 300,000 miles on them, there was a sudden surge of interest in foreign cars. I believe the cars coming from Europe were doing just as well.

I bought a used Datsun that already had 150,000 miles on the odometer, and I found it to be an excellent car. I drove it for a couple of years, then gave it to our son who took it to California. He said he drove it another year and sold it. He said that the last he knew, the Datsun was still going strong and he was sure it registered over 300,000 miles. The Datsun is now known by the name Nissan.

American carmakers had to improve their product to compete with cars like that. It was inevitable. Also, after the environmental movement in the 1960s forced American automobile companies to install complex anti-smog devices on cars, the price tag for new cars started on an uphill climb that hasn’t stopped.

I earned that first Chevrolet in one summer by harvesting an acre of strawberries on my parent’s farm and peddling them around town. My profit was about $600, which was the price of that two-year-old car. You could buy a brand new car in those days for $1,000.

Now with cars priced higher than what folks once paid for a fully working farm with 160-acres of good land, anybody buying one expects it to go the distance. Most of us hang onto our cars as long as we can keep them running now, coaxing every last mile out of them. Buying another vehicle, even a used one, is no light matter.

We might get goaded into making such a purchase by a smooth-talking salesman somewhere along the line, but it is easy to forget that once you finance a car through a bank, you face six or seven years of car payments and you are required to buy a full round of insurance. Sometimes the insurance can cost as much as the monthly payments on the car. If you drive an old car that has no lein you can afford to take a chance with the minimum amount of insurance required by law. Those payments are high enough and as far as I can tell, under no-fault insurance laws, they offer little protection whatsoever to either the driver or victim in the event of an accident. But that is another story.

In some states, new car owners pay a very high price each year just for the  license plate. Arizona, where we lived for a while, was such a state. People with new cars and those big SUVs forked over hundreds of dollars every year just to keep plates on their vehicles. I was told that the big four-wheel-drive trucks cost drivers something like $1,000 a year. We drove a 10-year-old Buick and I paid much less for my plate. In Arizona, you see a lot of very old and smoking cars on the road.

I don’t enjoy driving like I used to. With so many other vehicles clogging the highways, and all of our cars polluting the air, I would rather take a bus. Or a train. But we don’t have good bus service, and we have torn up most of America’s train track. So driving is required if you want to go anywhere.

Thus I had a car in my driveway longer than I wanted one. It was an old vehicle, completely paid for, and it was not a major drain on our monthly purse strings. Like my father, I intended to drive that vehicle until the wheels fell off. It was such a well built car I wasn't sure that was ever going to happen. Unfortunately, a botched cataract surgery left me partially blind in one eye so I voluntarily gave up driving.