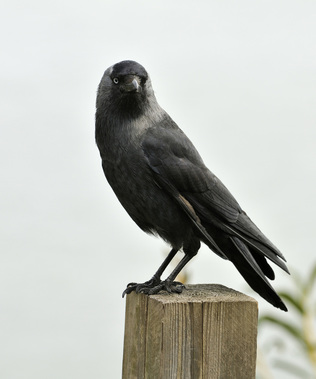 A rash of recent news stories apparently stirred by a Texas study, suggests that Ravens have the ability to trick one another over food and seemingly read each other’s minds.
The report that appeared in Nature Communications examined the cognitive abilities of ravens and compared them to the way humans think. Co-author Cameron Buckner of University of Houston referred to ability by both people and animals to perceive one another and reason what the other one is thinking. Researchers refer to it as “Theory of Mind.”

It is humorous to this writer to read these reports. It seems as if the “scientists” involved in such studies are making much to-do about simplistic things that any pet owner already understands.

I have written about the intelligent crow that clearly enjoyed teasing my father back when I was a child growing up in Michigan. The crow would follow my father down a seed row when he was attempting to plant his garden, skillfully eating the seeds behind Dad’s back as he moved down the row. Dad built a scarecrow in an effort to chase this bird away, only to find the bird sitting on top of it when he returned to the garden. One Dad awoke to find the crow staring at him through his bedroom window. That bird knew which window opened to his bedroom!

A few years back while we were living in Arizona, I was sitting on the porch of our rental unit with my pockets filled with peanuts. It was the Christmas season and we had a bowl filled with various nuts just inside the door. When a small squadron of woodpeckers landed close to me, I playfully tossed a peanut on the edge of the porch to see what would happen. One of the birds quickly grabbed the nut and flew off with it.

I dropped a second nut and the same thing happened. I continued to drop more nuts, each time dropping them closer and closer to where I was seated. The birds kept seizing their prize, but always keeping a keen eye on me. They knew I was there but since I was not moving, except to drop the nuts, they were willing to come close.

Finally, with a nut lying only a few inches from my foot, the birds decided the danger was too great. As long as I was looking at them, they would not accept their prize. Suddenly I heard a loud tapping noise on the wall behind me. When I turned to look the nut disappeared. I realized the birds had worked together to fool me so they could safely steal the nut.

We have a young Bombay cat at our house that is so intelligent we literally communicate with each other. I have learned that some animals, like this cat, understand certain words like food, brush, outside, etc. Sometimes she comes to me and makes it clear that she wants some kind of service.

A cat’s needs are usually relatively simple so it doesn’t always take long to figure out what it wants. I have discovered that if I ask the cat to “show me” what she wants, she will usually go to either her food bowl or the door. The other day she went to the place where we keep the brush that we used to comb her fur. She loves being brushed. But when I looked, the brush had been misplaced. I conducted a search of the house and was unable to locate the brush. Once she understood that I could not produce the brush, the cat stopped asking. It was as if she clearly understood that I had tried and for her, that was good enough.

I have had times when I have confronted wild animals when walking in the woods. I always project loving thoughts when this happens and find that when I do this, the animals do not seem to fear me. Of course I am not a hunter and never carry a gun.Consequently I have been able to get very close to certain birds and deer. We had bear and mountain lions in the forests of Arizona where I hiked. I saw their track but fortunately, never tested my theory by having to confront one of these creatures up close.

Back when my late wife Doris and I used to travel around, there was a spell when she had a good job at a local hospital and I worked for a local news bureau. She often worked on Saturdays so I was usually given the task of washing our clothes at a local laundromat.

The laundromat where I did our clothes had a large fish tank in the center of the room. In that tank was a large and aged carp. It was obviously a goldfish at one time that just continued to grow until it was moved into this large tank. It had never known any other life. I used to watch that fish, and eventually I began attempting mind communication with it. The fish responded by coming to the glass and staring directly at me. I was rewarded with mental images . . . yet it was not a reward at all. From that day on I was overpowered by a powerful sense of extreme sadness every time I visited that fish. It was an old soul that had never known freedom.