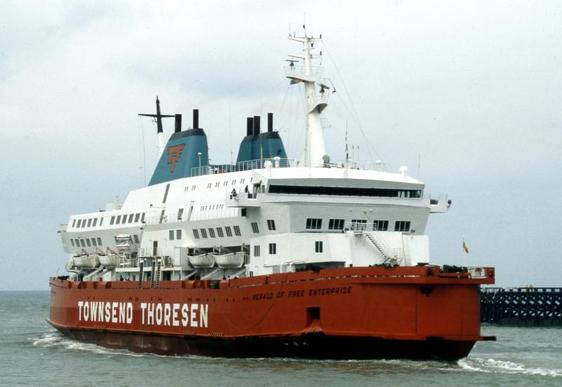 It happened just after the car ferry Herald of Free Enterprise dropped her mooring lines and began pulling away from the Zeebrugge dock. The ferry was bound across the English Channel to Dover with a full load of automobiles and passengers when it tipped on its port side and sank, half submerged.

A total of 193 passengers and crew members died, making it among the worse maritime disasters involving a British registered ship in peacetime. The date was the evening of March 6, 1987.

The disaster happened so fast and so unexpectedly there was no time to react. People caught on the port side of the vessel, or in the cabins below, were carried into the water with little chance of escape. Many on the starboard side told of smashing windows and climbing onto the side of the overturned ship until they were rescued.

The inquiry that followed put the blame on the design of the ferry and the failure of an assistant boatswain to do his job and close the gates to the lower deck before the vessel left the dock. The boatswain, Mark Stanley, was taking a nap in his cabin while the ferry was loading. He failed to wake up in time to see that the gates were closed.

The ship’s first officer, who was responsible for the operation on the lower deck, admitted that he also left the deck. He had assumed that Stanley was on the job.  It was revealed that the ship was designed so that the operators in the pilot house could not see if the gate was closed or open.

There was another factor involved. A few years before this, a sister ship, also on the Dover to Zeebrugge route, sailed across the channel with the bow doors down and completed the trip without incident. Thus it was believed the ship would be safe to operate in calm seas even if the doors were accidentally left open. So what was the difference?

It seems that the Herald of Free Enterprise entered the Zeebruggee dock at high tide, and because of the design of the ship, the loading ramp could not reach the upper deck. To fix that, the captain ordered the forward ballast tanks flooded that evening to lower the ship’s bow. He forgot to have the tanks pumped out before leaving the harbor.

The moment the ferry got underway, those open bow doors scooped up sea water so fast the boat filled and sank.

Because of the bad publicity, the owners of the ferry line, Townsend Thoresen, changed the name of the business to P&O Ferries. The fleet’s red hulls were repainted in navy blue and the “TT” label on their stacks were removed.

The Herald of Free Enterprise was one of a fleet of three identical ships built by the owners in the late 1970s to carry cars and passengers on the Dover-Calais crossing of the English Channel between England and France. To be competitive with other ferry operations, the ships were designed with gates at both ends so cars could quickly “roll-on and roll-off.”

This particular trip into Zeebrugge was not a normal stop so the crew was not as familiar with docking procedures.

The Townsend Thoresen ferries appeared top-heavy with eight decks numbered A to H from top to bottom.

The wreck was salvaged and towed into Zeebrugge for repair. The company offered the ferry for sale but no buyers came forth. The ship was then sold for scrap in Taiwan.