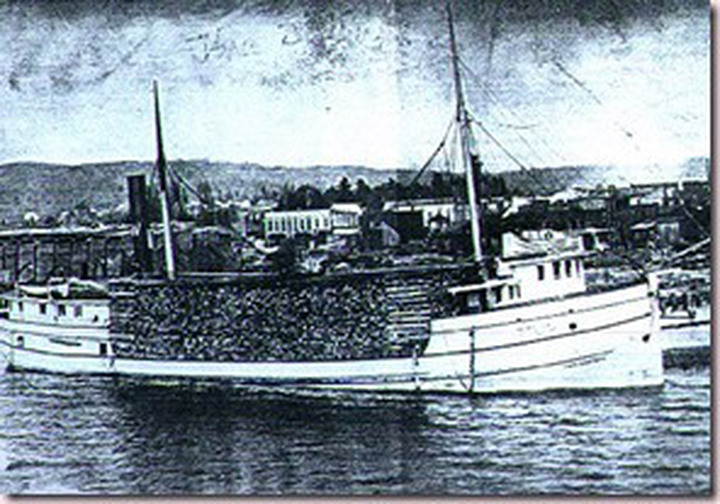 Wreck of the Three Brothers

The aging lumber hooker Three Brothers wrecked during a Lake Michigan storm on Sept. 27, 1911, while steaming from Boyne City to Chicago with a cargo of hardwood.

The hull of the 162-foot-long wooden vessel, under the command of Capt. Sam Christopher, began to leak shortly after leaving Boyne City. The leak worsened as the day progressed until the water overwhelmed the ship’s bilge pumps.

When the water gained enough to flood the coal bunkers, the black gang used kerosene to keep steam up and Captain Christopher turned the vessel toward the nearest shore.

He had full steam up when he ran the Three Brothers hard aground on South Manitou Island. The old boat literally plowed into the shoreline about 200 yards east of the lifesaving station. The crash split the ship’s bow open and dislodged the pilot house from the superstructure.

The ship came to rest with its bow in 15 feet of water and the stern in 50 feet of water. The storm soon began tearing the 23-year-old steamer apart. First to go was the deck load of lumber.

The Favorite was unable to salvage the Three Brothers. It was determined to be a total loss. When salvagers returned for her boilers the next year the remains of the wreck were completely submerged.

The Three Brothers was built to be exactly what it was, a lumber hauler. It was launched at the Milwaukee Shipyard Company in 1888 for the John Spry Lumber Co. in Chicago.

The boat’s original name was May Durr. It was given the name John Spry in 1892, even though the vessel’s ownership did not change. Then sometime between 1905 and 1910 the vessel was sold to William H. White & Co. of Boyne City. That was when it was named Three Brothers, since three brothers, William, James and Thomas White were partners in that business.

The Three Brothers was given a general refitting, was caulked and repainted. Then it hauled coarse lumber from Lake Charlevoix to the company-owned mill in Tonawanda, New York until it wrecked.