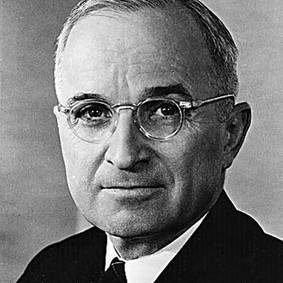 Of all the mass killers chosen for this site, the selection of President Harry S. Truman has been among the hardest for us to post.

Because of President Roosevelt’s death in office, Truman inherited the final months of World War II which included the fierce combat occurring between Allied forces and the Japanese. He also inherited the atomic bomb which was given to him as a weapon of war during those key months leading up to the end of that war. Thus it became his decision whether to use the bomb on the Japanese people or not.

Admittedly it was a terrible decision to have had to make. The situation from Truman’s perspective was that the Japanese were a fierce and proud people who were committed to fighting to the death for their homeland. Even though their military was already in shambles, and we were already fire-bombing Tokyo and their military industrial cities, the Japanese was refusing to surrender. They had resorted to suicide kamikaze flights with every aircraft they could get into the sky, in a last-ditch effort to sink our naval ships and slow our plan to invade the mainland.

It appeared that in the proud Japanese tradition, the people were going to fight to the death. To prolong the war might have meant the deaths of millions more allied and Japanese soldiers. These were the reasons Truman ordered the U.S. military to drop atomic bombs on the Japanese cities of Hiroshima and Nagasaki.

There were arguments against the use of the atomic option. After the collapse of Germany in Europe, Russia was in the process of turning its forces around to assist in the war against Japan. Also the Japanese government was sending messages indicating a willingness to negotiate for surrender. Their main issue was that Japanese Emperor Hirohito not be tried as a war criminal. The U.S. leadership was not willing to agree to that critical point.

In spite of this, Truman ordered the bombings anyway. The bombs incinerated the two cities, killing thousands of civilian men, women and children where they stood. Thousands more were left crippled and mutilated. The casualty count in the two cities has been estimated at over 200,000 people.

The action brought an abrupt end to the war in 1945. But critics believe Japan was prepared to surrender anyway and the bombing was totally unnecessary. As it turned out, Hirohito was spared the dishonor of being tried as a war criminal.

The end of the war with Japan created a political conflict in Korea, a territory that had been ruled by Japan. At the end of the war the U.S. and Soviet Union agreed to divide Korea’s rule at the Thirty-Eighth Parallel. Two separate Korean governments were established. Then in June, 1950, North Korea invaded South Korea. Russia and China were supporting the invasion. Truman joined the United Nations Security Council and sent forces in to support South Korea. Thus we were again at war.

In spite of circumstances beyond his control, Truman became a president of the United States during two major wars in the Far East. His decisions cost of lives of millions.
He will always be remembered as the world leader who ordered the atomic bombing of another country. Hopefully, there will never be another leader forced to make this same terrible decision.