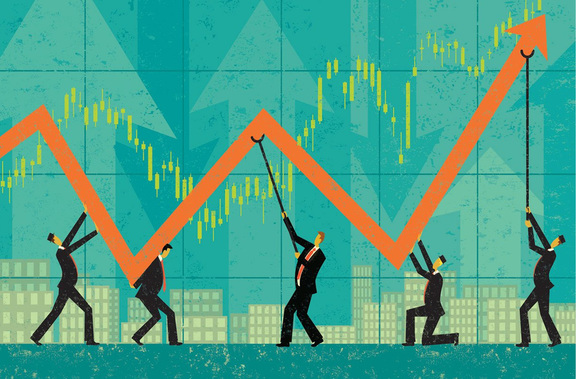 Stock markets are operating all over the world. And they are all linked in that they involve the buying and selling of stock shares of big and small business corporations. These corporations operate largely because of the investments by people who literally own portions of the business.

Technically, anyone can buy stock on the exchange. But buying and selling shares of stock can be a risky business for low and moderate income people since the value of stock rises and falls on news about how well the company’s product is selling and whether profits are expected to be shared. Thus playing in the stock market has evolved over the years into a rich man’s sport.

Our friend with the code name Jack Sprat, from Godlike Productions, lists the "propping up of the stock market at any cost, and any expense," as number 56 on his list of concerns. And he is quite right. Government officials in the United States have gone to incredible lengths over the years to keep the New York Stock Exchange open and running sometimes at great cost.

Remember that the 9-11 attacks on the World Trade Center and the collapse of the two towers actually shut down the stock exchange located nearby, but only for one week. Even though many of the offices in the Trade Center were directly linked to the exchange, the electric, water and communication links were severed and the entire neighborhood was poisoned with the dust and debris from the disastrous events, the Bush Administration made saving and reopening the exchange its top priority.

Some said they heard stories that the saving of the stock exchange was so important that workers held up on the search for possible human survivors in the rubble until links to the market were repaired and operating.

Efforts to keep trading flowing failed against Hurricane Sandy and the catastrophic storm that accompanied its landfall along the New England coast on October 29-30, 2012. With much of lower Manhattan evacuated because of the high winds, heavy rains and flooding, exchange workers stayed on the job, working from the upper floors of nearby hotels but flooding and the loss of power forced the exchange to shut down anyway.

When the major U.S. banks threatened to fail in 2008 after the "housing bubble" broke and billions of dollars in risky investments were "flushed away" across the land, the Federal Reserve and Congress invested heavily to keep the banks and major investment companies solvent, thus saving the stock exchange from a threatened meltdown.

The only other times that the New York Stock Exchange has been closed were a few months at the beginning of World War II, and for a prolonged time in the midst of the Great Depression in 1933.

The markets in the United States and abroad are the hearts of business and the symbol of the real god of the business world: money. Notice that the nightly television news commentators never fail to report the day’s trading on the market and whether stock holders enjoyed profits or suffered losses.

For the majority of Americans the happenings on Wall Street have little importance. This is news only of interest to the small minority of wealthy traders who play the markets and dare to risk their money on the chance that they might increase their wealth by a smart guess in business investments. Entire businesses of investment trading are operating successfully, advising investors on where to gamble.

It is true that big corporations provide jobs for a lot of Americans when business is good, but a lot of those jobs have been shifted to overseas locations in recent years. This is why there are so many Americans left out of work, out of their homes, and going bankrupt.

Big business is obviously America's first priority. It should be obvious to most of us that those priorities are in the wrong place.