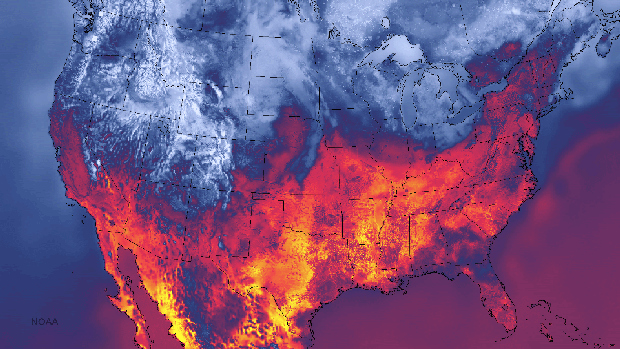 The Global Warming Issue Is Getting Terrifying!

While most Americans and the U.S. media are hung up these days over the insanity behind the picking of a new presidential candidate the scientific community is nervously looking at melting ice caps, world temperature gauges and the now deadly weather events. While the candidates pontificate about budget issues, terrorism and patrolling the nation’s borders, nearly a million residents of Fort McMurray, in Alberta, Canada, are fleeing for their lives to escape what will likely be deemed one of the largest ground fires to ever sweep North America.

The corporate controlled U.S. media can no longer hide the facts, even though candidates Donald Trump and Hillary Clinton are refusing to include climate change alias global warming as issues in their two-year-long multi-billion dollar campaigns.

It should not be surprising, perhaps, that two presidential candidates that are making climate change among their top priorities . . . Democrat Bernie Sanders and Green Party’s Jill Steinman . . . are not getting favored by voters in the state primaries. Not surprising because they are being carefully ignored, or given low media attention. This has been a cleverly rigged campaign. It has been a cleverly rigged news year, with stories zeroing in on election news, shootings and gun control issues, border drug control problems and terrible terrorist attacks by a manufactured international gang of Muslim extremists known as ISIS. Who has time to worry about the weather you might ask?

If it hasn't happened yet, most folks in the world will soon be severely affected by the new weather systems exploding all around us. It should scare the blazes out of everybody.

A paper published this month by Dahr Jamail for Global Research noted that Mauna Loa Observatory in Hawaii recorded a daily reading of carbon dioxide in the atmosphere at 409.3 parts per million. That might not seem significant but Jamail notes the CO2 content in the air has not reached that level for over 15 million years.

This is just the measurement of carbon dioxide. Mix that with the volume of methane now escaping from the melting ice, the warming oceans and the leaking oil and gas wells and we have a building recipe for climate disaster. And that disaster is already upon us!

Here are but a few of the recent revelations made public by climatologists in recent weeks:
An NASA report shows how the melting ice sheets in Greenland and the poles, and the distribution of water in the oceans over the globe are changing the weight distribution of the Earth. This is sliding the North Pole southeastward and influencing the natural wobble of the planet.

The permafrost in the arctic Tundra is melting, releasing methane and other greenhouse gases, which in turn are accelerating the heating of the planet. Thus early estimates of timelines for the meltdown are speeding up.

Ocean temperatures are helping create more destructive storms that are wiping out food crops. This will soon be a major international issue; raising the threat of additional warfare.

Jamail writes that a new report in the United States shows how increased carbon dioxide in the air is affecting people's health. The airborne particles are contaminating food and water, making the air dirtier and increasing diseases spread by ticks and mosquitoes. Other increasing health factor are allergies and intense heat waves, which are already occurring.

Island nations and coastal cities around the world are already feeling the effects of rising sea levels. Computer modeling predicts up to three additional feet of sea level rise. If the ice shelf completely melts away, the water level could rise as much as nine feet. A complete melting of the poles would cause a staggering 44.7 foot rise in the level of the seas. This will flood high population places like New York City, Miami, Los Angeles, San Francisco, Seattle and New Orleans in the United States, and many great coastal cities like them all over the world. The mass population shift resulting from such flooding is unthinkable.

Ironically, while coastal areas and cities along major rivers are suffering from incredible flooding, large parts of the Midwest, the grain belt of the United States, is facing drought conditions. California has been rationing water because of drought conditions that have lasted several years. Australia has suffered from a 14-year drought. In India, electric generating plants have been shutting down from time to time for lack of water. The mighty Ganges River is beginning to go dry, which is creating a severe water crisis in India.

An estimated one billion people in Asia are in "high risk" of a severe water crisis within the next few years because their sources of water . . . mountain glaciers that feed major rivers . . . are melting.

A severe drought in Vietnam has killed thousands of farm animals.

The heating ocean waters are killing the coral. The Great Barrier Reef, a 1,400-mile-long coral reef and the single largest living ecosystem on Earth, is about 95 percent lost. The coral is dying all over the world. When the coral is dead, life in the oceans will die.
​
The heat, the lack of rain and winds are raising the threat of great and uncontrollable fires. The Alberta blaze is still out of control even as this story is being written. It has the potential of being larger than the fire that raged through Kansas and portions of Oklahoma in March, burning about 400,000 acres. A wildfire in Nepal this spring consumed over 3.2 million acres of forest. These appear to just be the beginning of a disastrous fire season unlike anything we have ever experienced before.