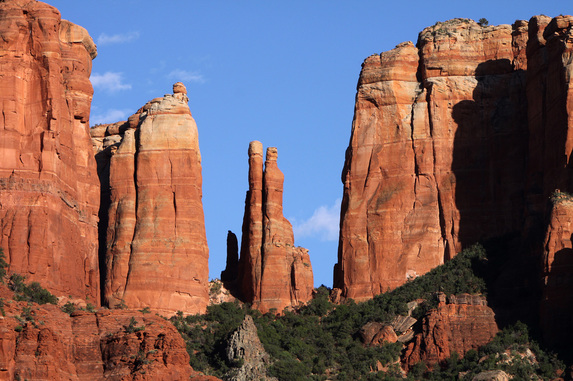 We couldn't help feeling a bit smug when we read a recent article listing what the author claimed were the 10 biggest mysteries found in the American Southwest. Having lived there for a few (all too brief) years, we can add many more to the list that we are sure barely scratches the surface.

There is something unusually strange and inviting about that dry high-desert area where the Hopi make their home as do numerous other Native American tribes. All of the aboriginal people have their secret mystery stories, of course. The native legends abound where ever one might stop for a cup of coffee or a beer along the road.

It usually takes more than a brief stop, however, before the locals begin to unveil their stories. Working as a news reporter in the White Mountains, and before that just drifting around from Gallup to Holbrook, north to Red Rock and south to Phoenix and then Sedona, my wife and I uncovered a long list of tales . . . some of them already told on my website . . . some still winding around among my fond memories of that amazing place.

The article referred to above was issued by the Southwestern United States for Visitors, a tourist promotional organization. The writer was obviously skimming the surface of local legends when she listed such "mysteries" as the Roswell UFO crash site, the story of Area 51, the Phoenix mystery castle, a few ghost towns, haunted hotels and mystery lights of Marfa, Texas.

Completely overlooked was the mystery of the Lost Dutchman gold mine in the Superstition Mountains just east of Phoenix, where a fantastic mother lode was alleged to have been found by two prospectors decades ago. People who have set out to find the mine have reportedly vanished without a trace. It is a great story and one that gets embellished with each new telling.

Then there is the Travis Walton UFO abduction story. Walton, a logger working in the White Mountains, was allegedly lifted into an alien ship as his companions looked on, then reappeared several days later stumbling out of the forest with a strange tale to tell. His stories lead to a book and Hollywood film. I had the privilege of getting a personal interview with Walton over the telephone after he released a second book about his adventure.

We were living in Mesa, Arizona, a suburb of Phoenix, in 1997 when people there saw an amazing display of mystery lights passing over that metropolitan area. The V-spread of lights was so wide that many believe they came from a single giant alien ship. Others say it may have been a squadron of ships. That incident is still being talked about among UFO buffs as proof of their claims that alien craft are visiting Earth.

And yes, we lived briefly in Sedona in a cottage on the old Smedley farm on a bluff overlooking that wonderful town. The community was named after Sedona Smedley, the wife of the first land owner in the area. There was truly an energy field, or "vortex" located right outside our back door. You couldn't see it, but just being there gave you amazing energy and an overwhelming feeling of happiness. Beyond that, there was no other way of describing a vortex. The aboriginal people came there from miles around to camp because it was, to them, a sacred place. That Sedona has been overrun by rich developers and retired millionaires who destroyed much of the natural beauty of the place with their multi-million dollar homes and golf courses is sad. A four-lane highway runs through that area today.

We met many unusual people in Arizona, some of them mysterious, homeless waifs who came almost out of nowhere and affected our lives in one way or another.

There was the gun-toting writer at the White Mountain Independent who said he went by an anonymous name because he said he was sought for crimes against the government. He was an active member of the local militia, drive an old pickup truck painted camouflage brown and green, and always carried a loaded .45 caliber revolver on the seat by his side.

Then there was the young man who lived in the forest at Sedona who claimed to be able to not only see ley lines, but alter natural Earth energies by influencing the lines. He had strange stories to tell. We let him pitch his tent in our yard for a few nights and use our shower.
​
We dealt with thieves in Arizona where ever we went. It seemed that stealing was a way of life for the natives. Our load of items to move as we went from place-to-place grew lighter and lighter until in the end, we had little left to move at all. And we discovered something interesting about this. We didn't miss any of it.