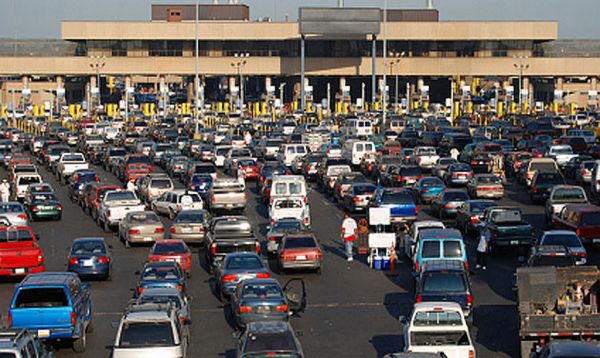 Traffic Jam At Mexican Border
Merging of The North Americas

Donald Trump’s wild idea of building a solid wall at the Mexican border and charging the Mexican government for the cost of it is an example of “closed system” thinking that tends to separate Americans from the world around us. Another name for it is Isolationism.

In our contemporary world, with the Internet opening bands of communication between nations and high-speed travel moving people from continent to continent within hours, we are sliding naturally toward a socialistic “one-world” system.

The harsh conservative thinking of Mr. Trump and his T-bag Republican colleagues seems completely outdated and out-of-place in the exciting new world that beckons. This stogy gang of old men who insist on hanging onto outmoded early Twentieth Century ideas is quickly losing its throne of power in Washington as the new socialists are beginning to have their voices heard.

It is a slow and painful process, but it is happening and as our world continues to shrink there is little anyone can do to stop it from happening.

Indeed, not all of the young voices are coming from the youth. At 74, Democratic Presidential Candidate Bernie Sanders is taking the lead in this movement and changing the dialogue in Washington with every speech he makes. Even if he fails to gain the party nomination for the top job, his electric ideas have been clearly heard and they will influence the way the nation moves in the years ahead.

Yet another progressive thinker who stood in power before his time was former Mexican President Vicente Fox, who proposed a merger between the U.S., Mexico and Canada. Rather than fight the immigration and narcotics wars at the borders, Fox perceived a united “North American Union” where people could freely move across borders in pursuit of jobs, social links, education and free thinking.

Fox floated the idea during summits with former President George W. Bush and Canadian Prime Minister Jean Chretien but ran into strong resistance; especially in the United States where he found resistance to losing the nation’s sovereignty. There also is an underlying religious current involved. A Christian belief that an “anti-Christ” will rise up from a “one world government” has created a popular resistance to doing anything about tearing down borders.

The Fox proposal would have been to join all three North American countries in an EU-styled North American Union. All three countries would be united into a single regional government using one currency.

In a recently published autobiography Fox wrote that “at summits I took every opportunity to advocate clearly for free-market policies; showing what sound economics could do to fund social justice; arguing for globalism, NAFTA and Free Trade Area of the Americas.”

The Fox plan stirred a meeting of the Council on Foreign Relations and representatives of the Mexican government to give it some consideration. The council perceived “increased labor mobility between countries, a solution of the problem of amnesty to the so-called “illegal immigrants” from Mexico living with families and holding jobs in the United States, and an easement of the high cost of guarding the borders against drug and gun smugglers and migrant workers seeking employment.

Instead of building walls, the plan would tear them down and make all people citizens of the North American Continent. How cool would that be?

Perhaps the American plan didn't fly at that time because of problems evolving within the European Union. Like all new political and economic experiments, the European Union was running into some kinks . . . mostly within the banking system . . . that are still being worked out.

The Fox plan was and remains a wonderful idea that should still be seriously considered. Much of the Southwestern United States was once part of Mexico and much of the population in that part of the country is of Mexican origin. Spanish is freely spoken everywhere, the hot spicy foods of Mexico are on just about every restaurant menu and the very culture of Mexico is beautifully intertwined with that of the North Americans. Opening the Mexican border would seem to be the natural thing to do.

Except for Quebec and the extreme Eastern portion of Canada where the predominant language is still French, much of Canada is so linked to the United States that it is difficult to find a difference there as well.

The differences, however, are found in the excellent Canadian health care system, the fact that Canadian currency is now worth more than the U.S. dollar, and travelers no longer get to cross the border without a passport. There was a time not long ago when passports were never needed. When we lived near the border, my wife and I often drove from Port Huron into Sarnia to shop or enjoy a meal. If we bought anything we usually had to declare it at the border and sometimes pay a duty.

I also drove a short-cut across Ontario on my way from Michigan to Buffalo, New York, when I was deep into Great Lakes historical research.

Gasoline in Canada is measured in petrels instead of gallons. Road signs measure distances in kilometers instead of miles. The weatherman reports the temperature in Celsius instead of Fahrenheit. Getting used to using the metric system might be the hardest adjustment for folks in the U.S.

One summer we drove all the way around Lake Huron, through Ontario, from Port Huron to Sault Ste. Marie, just to say we did it. It was a grand tour that was topped off with a railroad trip into Ontario and back on the popular Agawa Canyon rail system. We took the one-day tour.

The borders on both the north and southern parts of the United States are just a big nuisance for everybody concerned. The idea of guarding those borders to stop “terrorism” is a ruse that only increases government control on the people.