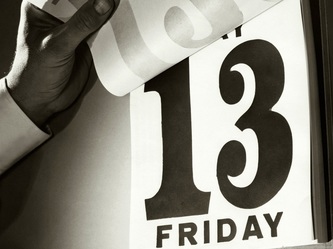 That Strange Friday The Thirteenth Myth

There is a peculiar myth in American culture, and I believe it carries in cultures around the world, that every thirteenth day of the month that falls on a Friday is a very unlucky day.

In fact, there is mythology that marks the Number 13 as unlucky, and other tales claim Friday is the unluckiest day of the week.  Ships used to delay departures on Fridays and lie over an extra day because sailors thought any vessel that left port on a Friday was doomed to a bad voyage.

The reasons for these strange superstitions appear to be varied.

The Thirteenth Tarot card is the Death card. People who interpret these cards say that the card rarely reflects upon death, however, but rather a time of endings of old things and perhaps the start of something new. It points more to the conclusion of a way of life.

Christian mythology points to Judas as being the thirteenth man at the Last Supper. It is said that witches gather in groups of 12 with the Devil as the thirteenth guest. The Apollo Flight 13 to the Moon was a near disaster with the crew barely returning home alive.

Donald Dossey, founder of a stress management center in Asheville, North Carolina, and author of a book about native mythology, traces the fear of 13 to a Norse story about 12 gods having a dinner party in heaven. When an uninvited thirteenth guest, Loki arrived, he arranged for Hoder, the blind god of darkness to shoot Balder the Beautiful, the god of joy and gladness, with a mistletoe-tipped arrow. As Balder died the Earth fell into darkness and mourning, thus it was declared a bad and unlucky day.

The logic behind marking Friday as an unlucky day is just as strange. The old stories say that Jesus was crucified on a Friday. At one time sea captains never set sail on a Friday because they believed that such a voyage would be cursed with bad luck.

(As a shipwreck buff, this writer once counted the number of known wrecks on the Great Lakes in a given year that began on a Friday and compared to them to the wrecks that began at other days of the week. There seemed to be a definite spate of bad luck occurring to vessels that dared to leave port on a Friday.)

Of course, among the superstitious natives, mixing both Friday and the Number 13 on the same day, is just flirting with disaster.

What most people don’t realize is that the Georgian Calendar that everybody uses is a faulted and archaic way of recording dates created by the Vatican for the Christians. It is a 400-year-old system based on a 2000-year-old day recorder known as the Julian Calendar. It is out of date and out-of-touch, and not used by people in other cultures. Thus Friday the Thirteenth for Christians is not necessarily Friday the Thirteenth for everybody.

Other than pure superstition, there is no reason for this day to be any less lucky than any other.

In fact, for this writer and his family, there is no such thing as luck or even coincidence. We believe that all things occur for a reason and sometimes synchronicities happen. These are neither bad nor good events, but merely occurrences designed by the universe for instruction and sometimes reward.

The sailors that believed setting sail on a Friday brought bad luck may unknowingly created their own misfortunes. With enough members of a crew believing that a vessel was doomed to failure because of departure on a Friday, the vessel had a greater chance of running into trouble. This is because of the mere power of collective mental thought. The sailors brought trouble on themselves simply because they believed it was going to happen.

The same kind of collective thought can make a Friday the Thirteenth a truly unlucky day for many people.

The belief that 13 is an unlucky number is so deeply entrenched in our culture that we sometimes go out of our way to avoid using this number.  High-rise buildings often lack a thirteenth floor, for example. Airports skip the thirteenth gate, and hospitals and hotels frequently lack rooms numbered 13.

As for us, we relish in the number. Fridays the Thirteenth are sometimes celebrated because of our contempt for such an unfounded superstition. Laughing at such things is often the best route to a cure.

We also enjoy running into the number 666, which is a different story altogether.