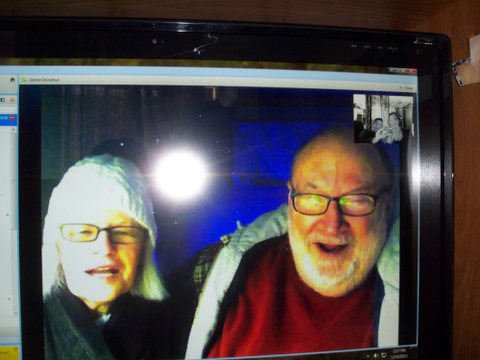 A Universe In Decay

As I sat quietly in our 10-year-old car, watching the people come and go from the front door at the local Wal-Mart, I saw an elderly couple exit the building with a shopping cart full of their purchases. It was obvious that they were way into their twilight years. Both hobbled along, she leaning on the cart for support and he holding onto the side of the cart and making his way with the help of a cane.

They slowly made their way across the parking lot until reaching a shiny new but modest sedan. It took them a relatively long time to load their purchases in this car and then get into it themselves. He slid into the passenger seat and she got behind the wheel. Then they slowly drove off.

As this was going on, the old people were quickly passed by young, trim and vibrant men, women and children, all rushing to and from the store.

It struck me that I was having a revelation . . . I was observing a universal truth from where I was seated. There was a time, and not that long ago, when this particular elderly couple also was young and as vibrant as those who now passed them by. There was a vivid understanding here that all of the living and physical things of this Earth, this Solar System, and this Universe are but rust. Everything is born or manufactured new and shiny, but within time it all decays and returns to the dust from which it came.

Those lovely young women with their taunting curves, those broad-shouldered young men filled with power and lust, the children so charged with energy they can’t keep from running and jumping, are all but a flower with its pedals spread for this one moment of beauty and sexual regeneration before withering and falling from the stem. All too soon they too will be in their twilight years, hurting with every step as they attempt to continue some resemblance of normalcy in their daily lives.

Those bright shiny automobiles, pickup trucks and motorcycles entering and leaving the parking lot are already turning to rush. Their days are numbered as the odometers spin up the miles, and the salt-tainted winter roads eat away at those bright metal machines. Ten years. Perhaps more, and the vehicles will be stacked among the others in junk yards, or they will be crushed in metal recycling plants and used to build other cars.

The building that attracts all the people, erected but a few years ago, is already showing signs of wear. The homes in which we live are demanding constant attention. Shingles weather and begin to leak. Windows crack. Grass grows to weeds. Painted walls wear and the wood begins to break down unless it is treated and painted again. Neglect a home for about ten years and it can fall to ruin. We know. My wife and I spent much of our lives reviving old houses left neglected far too long. It was a never-ending battle.

Every living thing around me, the gulls circling the parking lot ever seeking a scrap of food to scavenge . . . the pet dogs in the cars . . . the insects under foot . . . the grass and trees so green and lush all around us . . . it all exists for the moment. It is our created universe, our matrix, our moment in time that was then and never was before or will be again.

Scientists who study such things believe there is a life span for our planet, our solar system, our galaxy and our universe. It all began with a big bang and it will all come to an end, perhaps the same way. Some dare to say that the planets, the suns and the universe itself are living beings. Or perhaps they are part of the whole which may be what we think of as God.

But what are we? What is the being that exists within this temporary body? Some say we are the creator of all that we see, hear, smell, taste and touch. If this is so, then are we also finite? Are we to live for the moment and then blink out like a candle flame when our time is over? Or does the adventure continue after we shed these bodies?

That is the age-old question. It is the answer that we may only know once this life is over and we are forced to go into that mysterious “beyond” where we become equals at last. It is the place where we account for all that we accomplished during our time on this plane.
And how will that be measured? Certainly the amount of personal wealth will not matter.Nor will the number of children we produce and successfully raise. Kings who rise to great power over kingdoms will fare no better than the poorest servant in his court.

No matter what our circumstance, we have all known certain people who stand out in the crowd. They do so because they love beyond measure. Their every action, their every thought reflects the love and empathy they have for those around them. They are constantly giving of themselves so that others might be fed, clothed and comfortable.

These are the ones that matter when everything is said and done. But what will they gain when the final trump is sounded? Is there to be a judgment? Is there to be anything at all?
​
Ah, but the wife has returned from shopping and my afternoon muse is over. (Written in 2011 before my personal life fell further into ruin.)