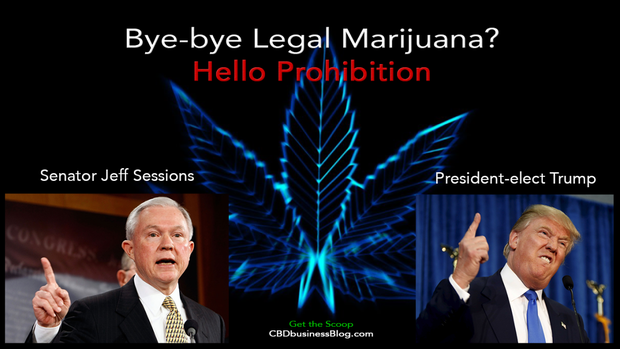 Trump Administration vs Legalization of Marijuana

The fight for the legalization of cannabis in the United States was gaining important ground until Donald Trump moved into the White House in January. Now his appointment of Jeff Sessions as U.S. Attorney General appears to have thrown the nation back into a dark period when the mere possession of a packet of marijuana could send a person to prison.

This is the most absurd enforcement of nonsensical law we can ever imagine. Marijuana has been proven to be non-addictive and less harmful to human health than tobacco and if anything, has medical benefits for people suffering from the effects of cancer radiation treatments, from joint pain, and glaucoma of the eyes. It was recently learned that marijuana helps people in efforts to wean themselves from the addictive effects of opioid pain killers. While it has been debated among researchers in the medical field, some believe the health benefits go far beyond this list.

There was a time when U.S. farmers were required by law to grow cannabis because it was an important source for the manufacture of robe used in sailing ships at sea. The rich fibers in the plant also were found to be useful in the manufacture of quality papers and fabrics. Cannabis is a natural and versatile plant that can be grown in just about any kind of soil so it can be an excellent agricultural crop . . . if it is legalized once more.

The states that are freely allowing the commercial sale of recreational marijuana are already cashing in on the new tax revenues received. Accompanying the legalization of marijuana has been a movement to free a vast number of imprisoned men and women serving time for the possession and sale of this natural plant. Before leaving office President Barack Obama pardoned a large number of prisoners serving time for marijuana labeled “crimes.”

Now enters Mr. Trump and his pal, Jeff Sessions, with a new mandate to re-criminalize marijuana use, its production and sale, even in states that have moved to legalize it. The movement is grinding harshly against the growing nationwide support for marijuana legalization. A recent survey from Quinnipiac University found that 71 percent of American voters want the government to respect state marijuana laws. Yet other surveys have shown that more than 70 percent of Americans have either use marijuana or express no opposition to its use among peers.

Marijuana has never been classified as a drug. It is non-addictive. Its effects are a pleasant euphoria that puts users at ease. Unlike marijuana, the other recreational “drug” in America is Alcohol, which is known to generate anger and sometimes fights among users gathered in groups or in bars. Alcohol remains a legal drug that can be freely purchased on the open market.

Sessions appears to be ignoring the known effects of marijuana when he claims that the plant stimulates violent behavior. In one meeting with reporters he was quoted as saying that THC in marijuana is attributed to “real violence. I don’t think America is going to be a better place when people of all ages, and particularly young people, are smoking pot,” he said.

The threat raised by Sessions also has severe financial implications. Forbes has noted that the states where marijuana has been legalized are already enjoying hundreds of millions of dollars in new tax revenues, and that over 100,000 new jobs have been created for legal marijuana cultivation. Cannabis has already become the third largest cash crop grown in Washington state.

The legalization of marijuana is not only reducing the amount of “criminal” activity among local producers, but has reduced the cost of court, prison and police expenses for local and state governments. It has reduced the problem of drug cartels and gangs as well since the plant is suddenly easily assessible and legal.

Where marijuana is sold legally it also is tested, labeled and packaged in child-proof containers and sold only to adults.

Like so many of the other crass ideas generated in Trump's brain, the campaign now being reopened against marijuana is clearly going in the wrong direction in America.