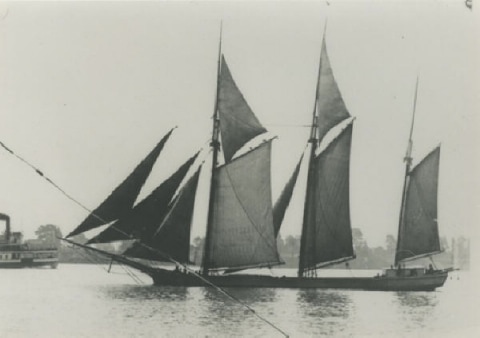 Strange Disappearance Of The Thomas Hume

When the schooner Thomas Hume went missing in a Lake Michigan gale on May 21, 1891, everybody assumed that the ship sank. They were correct but it was not until 2006 that a dive team searching the southern end of the lake found the wreck, resting upright, its masts still in place. Prior to that the lost Hume was among the great unsolved mysteries of the Great Lakes.

There was good reason for the mystery. After a week passed and the usual trappings from such a disaster; floating timbers, life jackets, lifeboats and bodies, failed to turn up, people began thinking that something abnormal, or perhaps even supernatural had happened. The Hume had disappeared without a trace.

The Hume originally was named the H. C. Albrecht. That was the name of Capt. Harry C. Albrecht to built and sailed the boat in the early 1870s.

Even though he no longer owned the boat, newspaper accounts said the Hume was commanded by Albrecht's son, Capt. George C. Albrecht, when it sailed into oblivion. The Hume and the Rouse Simmons, remembered as the ill-fated Christmas tree ship, were operating in the lumber trade that year, hauling cargo from Muskegon to Chicago.

The two schooners sailed from Chicago without cargo, traveling together for a while toward Muskegon. When a gale developed, the Simmons turned back. The Hume and its crew of seven were never seen again.

At first, when no wreckage was found, the owners believed the Hume may have anchored under the lee of an island or bay, or possibly blown aground. A thorough search of the Lake Michigan coastline, however, failed to turn up either ship or wreckage. As the days passed into summer, the mystery grew. How could an empty wooden schooner sink without a trace? Observers who knew boats spent hours talking about the Hume. They came up with several theories.

One man suggested that the boat was pulled down by the head by the weight of her anchors. Yet if that happened, the wooden stern or at least the masts should still be partly afloat and projecting out of the water. And what happened to things that might have been lying on the deck that would float away? Where was the floating wreckage?

Another idea: The Hume collided with another ship, possibly a steamer, was cut in two and sank. But where was the wreckage? If another boat struck the Hume, the master would have reported the accident. The Hume hired the tugboat Sills was hired to search Lake Michigan for clues of such an event. Days of searching the shoreline revealed no trace.

A writer for the Chicago Journal said on June 8: "The complete disappearance of the schooner Thomas Hume is so peculiar that old vesselmen have not ceased talking about it yet. There was a wild and woolly suggestion along the river this morning that the Hume might have gone to some obscure port, been repainted and changed her name and been sailed to some other portion of the lake."

But the suggestion was rebuffed by another old sailor who noted that "vessels have countenances like human beings. There is something different in the build of each one. It would be impossible for the Hume to pass by here without my recognizing her."

It was in 2006 that Taras Lyssenko of A&T Recovery accidentally came upon the wreck while searching for old Navy planes at the far southern end of Lake Michigan. The recovery team, working for the National Museum of Naval Aviation, had been recovering World War II era planes from the lake bottom. When sonar brought up the contours of a large schooner and divers went down to investigate, they were amazed to find it was the lost Hume.

And now there is another mystery linked to the disappearance of the Hume. It was lost in a storm many miles north of where it was found. How did it end up at the complete southern end of the lake. And why was it resting almost completely intact, in an upright position in 150 feet of water? Even the ship’s rigging and masts were still in place. Tools, coins, clothing and jewelry were found on the wreck. Researchers have described the Hume as “a time capsule” from the last century.