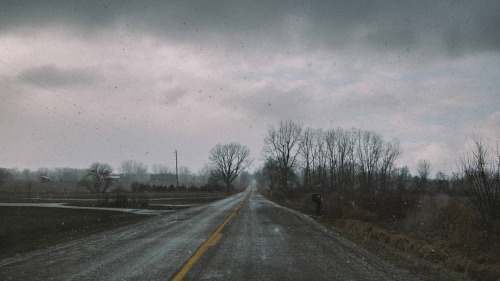 For a time my wife and I were forced to work in towns located about 60 miles apart and there was a need for one of us to commute. We moved into a house closer to my wife’s job. Our daughter, Jennifer, who was still enrolled in a private school in the town where I worked, traveled with me on a daily 40-mile-long trip between our home on Deckerville Road, near Cass City, to Sandusky, Michigan.

We also were attending church at Snover, a small community near Sandusky, so there was a regular commute to and from church as well. Consequently we traveled that narrow, blacktopped rural road almost daily.
​
Jennifer and I had two serious incidents involving deer. One morning driving south on North Sandusky Road I watched a female deer bounding across a snow-packed field and it appeared to be on a collision course with our car. I started braking, sure that the deer would stop before it got to the road, but it didn’t. I slammed on the brakes and we went into a skid just as the deer went over the ditch and landed on its haunches, also skidding across the blacktop right in front of us. We missed hitting her by inches.

The second time we had a confrontation with deer was on a Sunday evening. Jennifer and I were driving to church with a video player for a showing of a Christian oriented film that night. It was dusk and we didn’t see the herd of deer in the road just ahead of us until we were right on top of it. Suddenly a large doe appeared in my headlights directly in front of the car. It was facing left so I swerved to the right. Just as I turned the deer turned and jumped in front of the car again. I swung to the left but by then I was too close. The car hit the deer in the rear haunches, breaking its legs. The car by then was skidding out of control. It careened nose first down into a deep, wide grassy ditch. The vehicle dropped with its wheels parallel to the ditch while still in motion. I gunned the engine, built up some speed and drove up out of the ditch and back on the road, bringing it to a stop still upright and without a scratch.

As we were getting out of the car I heard a voice behind me say: “That was some pretty good driving.” I looked around and there stood a Michigan State Trooper, a woman who had been following us and witnessed the whole thing. Somehow we had missed hitting any of the other deer in the road, and there was no damage to the car. The deer was lying injured but still alive on the side of the road. I was glad the trooper was there because I would not have been able to help the poor animal. She pulled out her service revolver and shot it. She said under state law the deer was mine for its meat if I wanted it. I told her I had no way of getting it to a place to be butchered. She said she would call around and see if anybody else wanted it.

On another occasion, Jennifer was with me when I was driving home from work, traveling west on Deckerville Road. Just as we got to Cemetery Road, the main road going south from Cass City, a woman stopped her car at the stop sign at the corner then drove right out in front of us. I had to think quickly to escape what was about to be a very bad collision. I was traveling at about fifty miles an hour, too fast to stop. I hit the horn and had to choose. If she continued on I needed to swing to the right to miss the rear of her car. But if she stopped, I needed to swing left to miss the front of her car. I gambled and swung left. We were lucky. She reacted to my horn and stopped her car dead in the center of the road. I took the left shoulder and we buzzed around her safely. Jennifer commented on my skill at avoiding what we both thought was going to be a very bad wreck. I was just glad I guessed correctly at what that other driver was going to do.

On another occasion, it was a snowy Sunday morning and Doris, Jennifer and I were driving east on Deckerville road to attend church in Snover. Just as we were approaching Cemetery Road, a southbound car driven by a woman and filled with children skidded past the stop sign and right into the path of our car. Both roads were snow covered and slippery. I was not driving very fast but I could not stop my car either. I pumped my brakes, desperately trying to slow the car as we skidded toward what was going to be a broadside collision with the other car. I can still see the frightened faces of those children looking out of the car windows at our car just before we hit.

Fortunately it was a slow moving vehicle crash and the damage was limited, mostly to the side of the other car. Nobody got hurt. We didn’t make church that morning because we had to wait about an hour for the police to get there and deal with the accident. Because of the ice, the police found neither driver at fault.
​
How glad I was when our situation changed and we no longer had to make those daily trips down Deckerville Road.