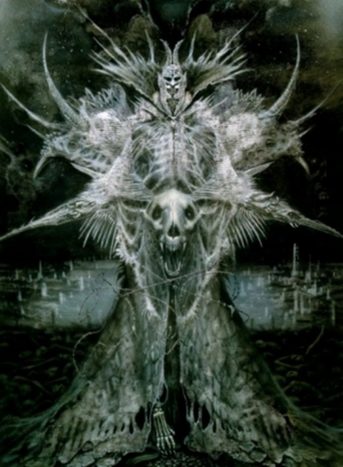 The late author Robert Anton Wilson liked to consider the forces working around us that create unexplained synchronicities. For example, he once wrote that the number 23 seemed to appear everywhere he looked. For us, it has been the number 666.

We see that number combination on automobile license plates, sometimes numerous times in a single day when we are traveling. We see it in telephone numbers, in addresses, and in unexpected places like airplane fuselages, on railroad cars and even on cash registers.

I once was making a small purchase in a grocery store and the price added up to $6. 66. I wasn't surprised. I even joked about it being the number of the beast. The clerk had a shocked look on her face and suggested that I buy something else to change the numbers.

My family has learned to enjoy this number combination when it pops up. Instead of fearing it, we have fun with it. We keep our eyes open, looking for it. That is because we understand the nature of synchronicity and have no fear of it. We even thought of opening a web site with these numbers, but found that about twenty or more people beat us to it.

The numbers 666 are being used in every way possible for presentation, even to the point of inverting them to an upside-down triple 999. We laugh at the interest in the three sixes. The numbers, of course, owe their egregious reputation to the Book of the Revelation in which can be found the warning that the numbers 666 will appear as the “mark of the beast” in the last days.

In 1998, my late wife Doris and I became entangled in another number combination: 333. When we lived that year in Springerville, Arizona, our apartment address was 333 Main, and our telephone exchange number had a prefix of 333. We also lived in the third apartment back from the road, if that had any meaning.

In occult circles it is believed that 333 is the number of the demon Cronzon, the so-called ruler of chaos and confusion. There is a saying that anyone who falls into Cronzon's pit is doomed to a virtual hell until he works his way through an almost impossible maze and makes his escape. Some never escape. The year 1998 was a long and difficult year for us, and we frequently joked about being caught in Cronzon's pit.

At the risk of sounding repetitious, I will again note that the year 1995 was among the most dynamic years of our lives. Not only were we waking up to an awareness of the light beings we are, existing in living machines only capable of carrying us for a brief few years, but we were witnesses to a world in turmoil.

It was the year of the bombing of the federal building in Oklahoma City. That event also set off a series of strange and unexpected synchronicities.

The bombing happened on a Tuesday morning, two days after Easter Sunday. The week prior to that, Doris channeled a strange message that there was going to be a major event because the demon Tron had just risen to power. When you think about it, the name Tron is an abbreviation of the word "electronics." Thus the message seems to have involved the powerful influence of radio, television, the telephone, and the Internet via our computers. Did the warning mean that the communications system of the world was under the control of outside forces preparing to do battle with the human race?

The message received that day suggested that something very bad was about to happen. While time is difficult to pin down when communicating with entities in the astral, we had a strong feeling of foreboding. We thought perhaps it would occur on Good Friday, or sometime during the Easter weekend.

Easter weekend passed. All we saw on the news were reports of religious events and visions of the Pope giving mass.

Tuesday morning I was at work in my office, located in a small three-room house located on the grounds beside our home. It was an old mother-in-law cottage, converted for my personal business use. I was in the habit of going back into the house for coffee in mid-morning. This morning I drew my coffee and for some reason I switched on the television, which was tuned to CNN News. Just at that moment there was a news bulletin. . . there had been an explosion in Oklahoma City. I sat dumbfounded as I watched the very first television news pictures of the horrors of that blast.

Even as we watched the news story unfold, something dark and sinister seemed to be dropping down over the nation. Even the sky outside our house, although blue, was a few shades darker than normal. We took particular interest in this bombing because we had been forewarned. It was almost as if we somehow were part of the gruesome events unfolding hundreds of miles away, yet inches from our noses when viewed on our television screens.

The week that followed was among the strangest in our lives. We had the feeling that everyone in the nation was suddenly suspect. We even felt a little guilty because we had known something in advance, although we had no idea what the event was going to be. We also knew the authorities were using every device conceivable to lay blame on somebody and it sparked a feeling of personal paranoia.

We kept having this uncomfortable feeling that mysterious "government" type plain cars with no marking were cruising our neighborhood. Could it be that federal authorities knew that we knew something? Were we under surveillance? From what we had seen in the past, including the O. J. Simpson murder trial also going on in 1995, the police didn't seem to care about catching the guilty person. It was a constant public drama. All the police wanted to do was blame somebody and do it as quickly as possible. In those days it was only rumored that the FBI and CIA could listen in on telephone calls as they were transmitted via satellite, but we believed it. We suddenly were very careful what we said when talking over the telephone about the bombing. Nobody wanted to be a suspect for something like that.

Then my former editor in Port Huron called to say the FBI was closing in on two bombing suspects just down the road from where we lived. That was the rural Decker home of farmers James and Terry Nichols. He wanted to know if I had any information about the brothers that could help them get an inside track on the story. I played dumb on that one. I wanted no part of this story. But I remembered the Nichols brothers. They were a little strange, but I couldn't believe they would have been in any way linked to a bombing of a big building like that in Oklahoma City.

Small farm, struggling organic growers, the Nichols boys made some interesting trouble in Sanilac County Circuit Court a few years before. They decided that the federal income tax was unconstitutional. They not only refused to pay but they attempted to bring a case against the IRS in the local Circuit Court that maintained the federal income tax was illegal. They wanted the judge in that county to help them start a battle that was bound to work its way all the way up to the U. S. Supreme Court. Judge Alan Keyes promptly dismissed the case on some legal technicality and sent the Nichols brothers packing. It made good news coverage at the moment, but never got beyond the local media.

The Nichols brothers also were allegedly arrested for discharging some type of explosives in the back of their farm. At least that was the story passing around the neighborhood. I later learned that what they were really doing was experimenting with a cloudbuster, a highly illegal device invented by the late Wilhelm Reich.

Cloudbusters are described as long hollow tubes that are believed to send moisture from the ground into the sky, which creates clouds, and consequently makes rainfall. Trees might be considered natural cloudbusters. The southwest Indians understood the principle and used their famous rain dance to do much the same thing. By merely thinking of themselves as long hollow tubes while dancing, the Indians often succeeded in creating clouds and causing it to rain. Knowing how the Indians did these kinds of rituals, I suspect the dancing continued for days before the event brought rain, but it probably worked.

Reich died in prison for this invention and the invention of something he called an orgone accumulator. This was a device he said used natural life forces to heal. Even though he was a well-trained psychiatrist who associated with such people as Sigmund Freud and Albert Einstein, Reich was condemned by the courts as a fraud. The man was jailed after he allegedly attempted to defy an order by a federal judge to have his inventions and all of his books and papers destroyed and burned. He died in prison of what they said were "natural causes." There are spiritual reasons why Reich's inventions were found to be so objectionable by certain people in high places, but it would take too much space at this point to go into it.

Knowing all this, it was small wonder that Terry Nichols and his old Marine Corps buddy, Tim McVey, got mixed up with something as horrific as the Oklahoma City bombing. That Nichols was a hometown native, and practically a neighbor, was eerie. I always wondered if the Nichols brothers really had anything to do with the bombing.
.
My father called one evening from his home in Kentucky. He talked about the bombing. He was overwhelmed by the fact that McVey lived near Bonner Springs, Kansas, the place where Dad grew up. That McVey had this link to the place of my father’s youth, and Terry Nichols was a former resident of the Thumb Area of Michigan, where Dad also had a farm for many years, and lived almost next door to me, was a synchronicity that was too obvious, even for Dad. He was a retired chemist who didn't possess a psychic bone in his body, but even he felt the chill that was radiating through our world that spring.