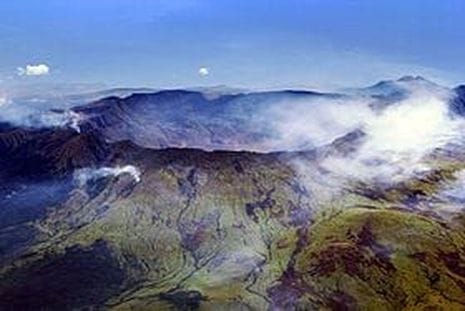 Of all the active volcanos in the world, Mount Tambora, on the island of Sumbawa, Indonesia, is perhaps the most troublesome. It has been quiet since his historic eruption of April 10, 1815. But that particular blast was so loud it was heard more than 1,200 miles away, the ash created a volcanic winter across the Northern hemisphere, crops and livestock perished for lack of food, and between 71,000 and 92,000 people were killed.

The eruption was an explosion at the central vent that turned the entire mountain into a glowing spectacle of flowing hot lava and finally a collapse of the caldera, which sent 13-foot tsunamis off to destroy property and leave death and destruction on the surrounding islands. The ash cloud was so thick that the sky turned pitch black for 370 miles away.

The event began with numerous smaller eruptions and was followed by additional activity that continued up until another sizeable but smaller eruption in August, 1819. Heavy volcanic ash fell as far away as Borneo, Sulawesi, Java and Maluku Islands.

The explosion of Tambora had about four times the energy of the Krakatoa eruption in 1883, making it perhaps the most powerful volcanic eruption in recorded history. There was so much ash thrown into the Earth’s stratosphere that it dimmed the heat of the sun for several years. The year 1816 was remembered as the "Year Without A Summer." Because of massive crop failures, the year produced the worst famine of the Nineteenth Century.

The cold weather was blamed for a severe typhus epidemic that struck southeast Europe and the eastern Mediterranean between 1816 and 1819, and a new strain of cholera emerged in India.

Before the eruption, Mount Tambora was among the tallest peaks in the Indonesian archipelago, rising an estimated 14,100 feet. Today the volcano stands at 9,350 feet, and it remains active.

Could such an explosive blast ever happen again? In both Krakatoa and Tambora, the primary vent by which lava and gases made their escape somehow became plugged, causing a huge build-up of energy before the mountains literally exploded. Both volcanos remain active, but unless a similar vent plug occurs, it is unlikely that we will see either peak blow up with this kind of force in our lifetime. Both are part of a string of active volcanos on the so-called "Ring of Fire" circling the Pacific Ocean. Thus it is possible that yet another one of the active volcanos on that ring, or perhaps someplace else in the world will explode and cause extensive destruction.

Geologists using radiocarbon dating have determined that Tambora erupted at least two times in the distant past. One was in about 749 AD and in 3910 BC. It could not be determined how severe these eruptions were.