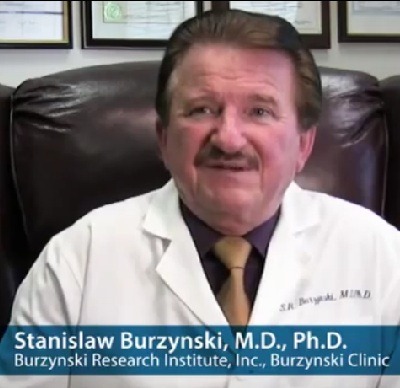 Cancer Cure Held Back For 36 Years

Dr. Stanislaw Burzynski of Houston, Texas, claims he has had a cure for certain forms of cancer for the past 36 years, but it was never formally approved by the FDA for clinical testing until just this year.

The 72-year-old Burzynski says he is using injections of antineoplastons, combined with the new gene-targeted therapy, to cure inoperable pediatric brainstem tumors in children. He believes the treatment may attack other forms of cancer plus AIDS, lupus and other illnesses.

The Polish-born doctor has been offering his “alternative” treatment at his Houston clinic since 1977 and claims about a 50 percent success at curing certain types of “incurable” and “inoperable” cancers in patients who come to him.

Burzynski, who has no board certification or formal training in oncology, has given his treatment to over 8,000 patients who have visited his clinic, and apparently has had moderate success.

It was because of his success at curing cancers in some of his patients that Burzynski has avoided various attempts to shut down his clinic, side-stepped litigation and won permission from the FDA to continue using his treatment on a “trial basis.” Also Texas state laws limit the state’s medical board’s authority to remove his license and the ability of terminally ill patients to collect damages.

But various newspaper and magazine publications have attacked his clinic and some critics have gone so far as to say Burzynski is nothing more than a snake oil salesman.
But he has been saved by a band of devoted followers, claiming that his treatment cured their cancers, who have testified at hearings and helped him keep his clinic operating. After a federal grand jury indicted Burzynski on felony charges and ordered him to stop prescribing antineoplastons in 1995, dozens of patients went to Washington to speak on his defense.

The FDA bowed to the public pressure and granted Burzynski permission to continue using the treatment on an “official trial.” This was followed by a two-year partial clinical hold. But the hold was recently lifted and Burzynski’s Research Institute now has permission to proceed with Phase 3 trials for cancer patients. The first phase will deal with Diffuse Instrinsic Brainstem Glioma only, but it is a start.

If Burzynski shows in the trials that his formula for injection treatment of cancer is effective, it may mean the end of extensive, painful and lengthy chemotherapy treatments plus all of the side-effects associated with chemotherapy.

Approval of Burzynski’s treatments also threatens a multi-billion dollar oncology division in contemporary medicine. This is great news for cancer patients and insurance companies, but threatening news for hospitals and doctors that specialize in cancer treatment.

The politics behind the FDA’s long stall in approving the Burzynski method of treating cancer is based on money, of course. By offering a simplified cure for cancer, through injections, the money dries up.

Many critics have long suspected that effective cancer cures have been held back for years because of the powerful medical industry that specializes in oncology. The new discoveries in genetics, however, has been forcing long overdue changes in curing what ails us.