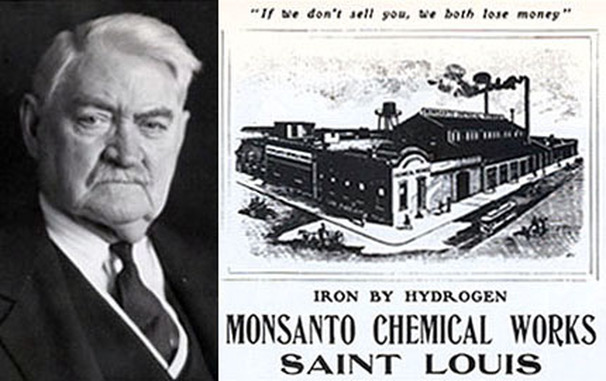 Perhaps the most hated business operating in the industrial world today is the Monsanto Corporation, the producer of some of the most dangerous hybrid foods, war chemicals, plant and insect killers and agricultural products ever known. And believe it or not, Monsanto was founded by a member of a Jesuit organization.

It was John Francisco Queeny who founded the Monsanto Chemical Works in St. Louis, Missouri in 1901. He opened the plant to produce the artificial sweetener saccharin for Meyer Brothers Chemical Co. The name Monsanto was his wife’s maiden name.
​
In addition to saccharin (which became controversial after lab tests in the 1960s showed that it was a possible carcinogen after it was linked to cancer in rats) Monsanto soon produced margarine, Monosodium Glutamate (MSG) and hydrogenated vegetable shortening.
​
We now recognize all of Monsanto’s first products as bad for human health. Margarine, a vegetable-oil-based substitute for butter and hydrogenated vegetable shortening are laced with trans fatty acids that raise levels of bad cholesterol and increase the risk of heart disease and diabetes. MSG damages brain cells.

Monsanto has continued to produce damaging and sometimes deadly food and chemical products ever since. Some of the worst include genetically modified seed and foods, PCBs, DDT, dioxins, aspartame, Agent Orange, Roundup herbicide and Synthetic Bovine Growth Hormone (rBGH).

About the only product we could find on the list of things produced by Monsanto that might be considered beneficial for humanity is aspirin. For a while the company was the world’s largest supplier of this natural and well-known pain reliever.

Queeny, who lived from 1859 until 1933, was born in Chicago and moved to St. Louis in 1897 where he went to work for Meyer Brothers Drug Company, a major wholesale pharmaceutical company. While employed with Meyer he founded Monsanto Chemical Works and produced saccharine which he sold to Meyer. He remained with Meyer until 1906 until he could live on the money he made at Monsanto.

Here is the kicker. While working at Meyer Brothers, Queeny was “inducted into the Knights of Malta order.” According to WorldTruth.TV St. Louis is a “Jesuit stronghold” and host of St. Louis University. It has been one of the Jesuit’s many world schools and universities since 1818.

The full name of the order is The Sovereign Military Hospitaller Order of Saint John of Jerusalem of Rhodes and of Malta. It began as a humanitarian organization designed to offer assistance to people of all religious faiths and nationalities prior to and during the Crusades. The order continues in this capacity today, although its members have been involved in warfare operations during its long and complex history that is believed to have had its origins in about the year 1050.

In 1113 Pope Paschall II issued a bull placing the order under the authority of the Holy See. The Society of Jesus, later to become the Jesuit Order, was founded by Saint Ignatius of Loyola in 1534. Thus the Knights of Malta is probably the oldest order of its kind operating within the control of the Vatican.

The Jesuit Order today is described as “the head of the serpent.” Operating under its control are the Knights of Malta, the Knights of Columbus, the United Nations, the European Union, NATO, the World Bank and various other major banks, the Federal Reserve, the IMF, numerous secret services including the CIA, most major corporations, Freemasons and other secret societies, the Bilderberg Group, Skull and Bones, the Council on Foreign Relations and the Trilateral Commission.

In short, the Jesuits are a major world power and the Vatican, with its new Jesuit Pope Francis and Black Pope, the Rev. Father Adolfo Nicholas, are the men who appear to be in control of everything.
​
So if you are wondering if you can ever escape the grip of the Monsanto Corporation on our agricultural products and medical supplies, consider this. In 2013 Congress passed and President Obama signed into law the HR 933 Continuing Resolution, better known as the “Monsanto Protection Act.” This act protects Monsanto from litigation or efforts by the government to control Monsanto’s production of farm products and GMO seeds. The U.S. federal courts cannot stop Monsanto from planting crops anywhere they choose.

We also report that we appear to be getting saccharin in our soft drinks and a lot of our sweetened “processed” foods. The FDA attempted to prohibit the sale of the stuff in the 1970s, but then quietly reversed its decision. They said saccharin produced cancer in lab rats but then declared that it did not affect humans.