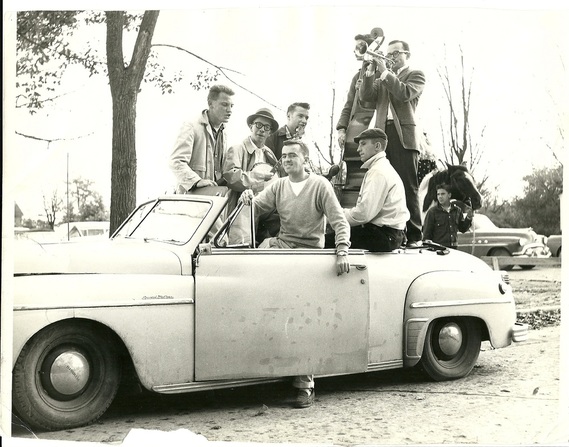 With The Beaver Boys
Springtime On The Chippewa

The Chippewa River flows through Mount Pleasant, Michigan, where I attended Central Michigan University in the late 1950's. The area is probably developed into costly housing units today, but when I was there, the river was a favorite playground, especially in the spring after a long cold winter of intense studies.

I remember spending a sunny Saturday canoeing the river with a girl I was especially fond of. And I remember the parties. There was one special spot known as the stile, located at the end of a dirt road. Someone had erected a wooden stile, or stairway to make it easy to climb over a fence and giving us access to a vast grassy bank along the river. On a warm spring weekend night it was common to find students surrounding several bonfires, drinking beer and having a good social time.

There were two problems with the above scene, as nonabrasive as it appeared on the surface. We were breaking two laws; it was trespassing on someone’s private property and most of us were under the Michigan drinking age of 21. Thus it was common to have police raids on our spring social gatherings along the Chippewa.

When it happened everybody usually scattered in all directions. We left our cars parked in the field and just ran off into the woods on foot, not daring to slip back to get our vehicles until all signs of the police were gone. I don’t know why it never occurred to us that the police could just read our license plates and track us to our homes if they chose. There were rarely any arrests, although I recall one very intoxicated young man staggering up to the police, beer bottles sticking out of several pockets. When confronted by an officer he drunkenly said: “Take me to your leader.”

That boy spent the night in the local jail. But his silly act became legend on campus.
My involvement with a group of musicians, a Dixieland band known as “The Beaver Boys,” led to some especially memorable debauchery. (I was not a member of the band, but was included in the club with a few other characters who didn’t perform either.) There were nights when the whole band would gather on the river and perform for the students.

The trombone player in the band was Tom Stroff, the originator of the “monkey face” that became the secret symbol of Beaver Boy membership. That was because we also existed as a mock fraternity. Thus by jamming our tongue under our upper lip, peering wide-eyed, our bodies slightly tipped forward and our arms hanging loose toward the ground, we greeted one another on campus making the Stroff monkey face.

Tom was extremely agile and could climb anything. He once scaled the side of Barnes Hall and entered one of the rooms through a second story window. On one particular night Tom came up with the idea of putting the dixie band up in the trees surrounding one of the gatherings. So they did it. We had Tom’s trombone in one tree, Bill Haver’s banjo in another, Gary Carden’s trumpet in still another. I don’t know if the bass player got his instrument up a tree or not. I rather doubt it. They actually played a few Dixie songs from the trees that night. It sounded strange but who cared. It was all for fun.

I was among a few of the Beaver Boys attending an American Literature class that was reading Mark Twain’s classic Huckleberry Finn one spring. On that particular weekend, it was a few days before spring break and the weather was especially warm and balmy. The Twain novel and the weather inspired us to build a raft and float it on a mill pond, created behind an abandoned old mill and dam located in the heart of Mount Pleasant.

When we floated the raft, it was large enough to hold several band members, their instruments, and a case of beer. Although I was not in the band, since I believe it was my idea, I was invited on the raft too. We pushed off and offered the town some wild Dixieland music from the middle of the mill pond. Someone offered a canoe for us to use to come to and from shore . . . usually to bring more refreshments. I was surprised that nobody got the police involved in that episode.
​
That night we all had severe sunburns, but it had been such a grand day nobody really cared.