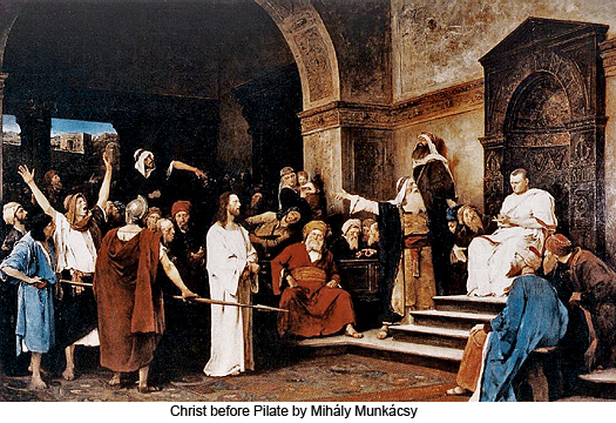 Why They Killed Jesus

The Bible story of the trial and murder of Jesus is strangely lame when you think about it. The criminal accusation against Jesus is so vague it does not appear to be a serious enough offense to have caused Pilate to deliver a death sentence.

An interesting theory once presented on the website Prison Planet probably makes about as much sense as any we have heard. They murdered Jesus because he attacked the money changers.

The article quotes the Rev. Howard Bess, a retired Baptist minister and frequent columnist for various Internet publications, as pointing out that the entire movement to kill Jesus stemmed from his assault on the money changers operating in the temple.

“Jesus did not go to the temple to cleanse. He came to the temple to announce the destruction of a whole way of life,” Bess wrote. “Those who operated the temple had no power to silence Jesus and put him to death. Those powers were held by the Roman retainers. . . In other words, Jesus wasn’t sentenced to death until he challenged the money changers.”

Bess notes that for both the Roman power figures and the Jewish merchants, “It was the temple incident that took Jesus from being an irritating, but harmless country rebel from the rural north to a nuisance in a city that controlled the great tradition.”

Notice that in Matthew 21, the first thing that Jesus did after riding into Jerusalem on an ass on what is now celebrated as Palm Sunday, was enter the temple and turn over the tables where the money changers were doing business.

Jesus didn’t stop there. He went into the temple and preached to the multitudes, severely condemning the practices of the scribes and Pharisees and the way they were gaining personal wealth at the expense of the poor, and ignoring their duties as leaders of the Jewish faith. He said: “Woe unto you, scribes and Pharisees, hypocrites! For ye pay tithe of mint and anise and cumin, and have omitted the weightier matters of the law, judgment, mercy and faith: these ought ye to have done, and not to leave the other undone.”

It didn’t take long for the power figures in the city to respond to the attack. Within only days, Jesus was brought before Pilate to stand against accusations of general insurrection. They accused Jesus of non-payment of taxes, threatening to destroy the temple, and claiming to be a king. All of the charges, of course, were unfounded. But the mere accusations by the wealthy power structure of the community were enough to force Pilate to do something. Thus Jesus was condemned to die as an example to the others who might have been moved by the things Jesus had told them.

It is important to note that Jesus never declared himself to be the Son of God, and he was not attempting to launch a new religion. His purpose was to attempt to change the twisted ways of the leadership within the Hebrew temple and set Judaism back on a correct course.

That he once sent disciples off to gather coins "magically from a fish" to "render unto Caesar" suggests that Jesus also was diligent about paying his tax debts. Also the tipping of the tables used by the money changers would not constitute the threatened destruction of the temple, at least under contemporary law. But it was the issue that angered the bankers enough to want to severely punish the man who dared to do such a thing.

From what he told his disciples during that last week before he was killed, Jesus devoted nearly all of his time teaching his followers how to correctly live, with love and compassion for one another. The Book of Matthew records some of Jesus’ most important messages in those chapters leading up to the arrest, trial and execution.

In the end, it wasn’t the fact that Jesus was teaching love that brought about his death. It was all about money.