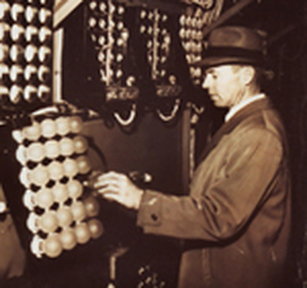 The Almost Unknown Genius of Vernon A. Trigger

During the years that I worked as a bureau reporter for The Times Herald, a daily newspaper published at Port Huron, Michigan, I met and attempted to write a featured story about Vernon A. Trigger, an eccentric retired inventor/engineer living on the Lake Huron coast near Forestville.

Trigger’s story was so remarkable and so involved that I spent more than one session with him, getting all of the information I needed for the story. Then after the piece was written and filed, the lame-brain state editor I was working under at the time, refused to believe it and would not publish it. Thus the Trigger story remains unknown to this day to the people who probably knew him best in his final years.

Over the years I have written snippets about Trigger in various stories on my web site, but because most of the information has somewhat faded, I have never, at least until now, tried to put it all down on paper. Going through my mail recently I came across a note from Don Davis, who commented on a story where I had mentioned Trigger. Davis said he was one of the engineers working in his basement laboratory in the 1970s, at about the time I did the Trigger interviews. He asked if I had any additional information to share.
So here goes. This is the Vernon Trigger story as I can best remember it:

Vernon was born and raised in Carsonville, Michigan, a small town in Sanilac County located only a few miles from where I lived and worked in those years. The Trigger family is still living in the area. One relative, perhaps a sister or a cousin, was serving as the president of the Carsonville State Bank.

As he was a boy growing up in Carsonville, Vernon said he was fascinated with electronics. He and a friend experimented with building crystal sets and attempting to transmit radio messages. Other than high school, I am not sure Vernon received any formal training. Everything he knew was from personal research, reading technical journals or associating with people in the field.

All we know is that as a young man, Trigger went to work for Westinghouse and was involved in the design and construction of the first commercial radio transmission tower for CKLW Radio in Windsor, Ontario, just across the Detroit River from Detroit. Also during this early time in his life, Trigger went to sea and was instrumental in designing and building and first ship-to-shore radios.

I believe there were other inventions and achievements between the Westinghouse years and the time that Vernon and his wife, Vera, moved to the Boston area and got involved in running an amusement park outside the city. I believe they may have even owned this business. Trigger enjoyed his involvement in the park because he could let his imagination run wild as he designed all kinds of gadgets that made the place unique . . . especially the fun-house.
​
He told of creating the effect of a living human head, with a man seated under a table with only his head showing. From above Trigger had tanks of red liquid that looked like blood, which was being pumped in and out of the head. He said he made the trick so authentic appearing that people really believed they were looking at the severed head of a real person that was being kept alive by pumps and tubes and wires. He joked that nobody seemed to notice that different heads were on the table from time to time.

It was during the time he ran the park that America was plunged into World War II, and the subsequent rationing of gasoline almost put him out of business. As Davis put it in his letter: “There were several car carrier trucks available, since there were no new cars to transport. Vernon converted them to busses by adding bench seats and converted the carburetors to run on methane gas. The methane gas source was the town sewage plant.” He said Trigger joked that they ran the buses on “bottled farts.” The free shuttle service and Trigger’s clever carburetor design saved the business.

In his letter, Davis noted that Trigger held several patents for his inventions. He sent a copy of one he found on line, which was for an improved system of combustion for gasoline powered engines that he claimed eliminated the need for a catalytic converter. The system used some form of ionization or electrolysis to provide an almost 100 percent burn of fuel with an extremely low level of carbon emissions.

Like so many of Trigger’s amazing ideas, the automobile industry obviously ignored his patent. His special carburetor still is not in use today.

Later in his career, Trigger got involved with the federal government in the design and building of various nuclear facilities and also had a hand in the space program at the old Florida base known in those days as Cape Canaveral. He was involved in the electrical work on Pad 19.

When he retired, Trigger returned to the place of his roots in Sanilac County, and there got interested in architecture. He designed several homes for friends that still stand today in and around the Deckerville area. The houses have a way of blending into the landscape much like the designs of the late Frank Lloyd Wright.

Trigger designed and built his own retirement home which looked like a regular house, but he was proud to say that the house broke all of the building codes imposed at that time in the City of Detroit. He got away with it because Sanilac County did not have a building code or building department at the time. He said he designed the house that way to prove how silly and unnecessarily restrictive the codes are to home designers and builders.

The house was open and spacious, without the usual supporting walls and the heating system radiated from the ceiling to objects in the room. Davis wrote that so-called experts “laughed at the system said said he’d freeze to death in the winter. But I’ve lived in the house when the temperature was near zero and the wind off the lake was 30 miles per hour and we were comfortable. The heating bill was a fraction of what it should have been.”

I personally remember how proud Trigger was of his heating system. It was a strange sensation to experience the heat. It seemed to heat the body, but when you sat on a plastic or wooden chair, we found it cold because it was not absorbing the heat.

Davis wrote: “To test the strength of the house roof, which had no load bearing internal walls, Vern got about 20 of the biggest guys he could find and sent them up to stand on the roof. He rigged a dial indicator to a pole and moved it around the house trying to measure the ceiling deflection has his ‘variable load’ jumped up and down in unison at various points on the roof. He couldn’t measure any deflection.

“The roof was built more like an aircraft wing than a roof. (Trigger) always said that some day as a publicity stunt he would get a crane and lift a cement mixer up and place it in the center of the roof. He was sure that it would handle the truck, but a little nervous about using one fully loaded with concrete.

“The house was constructed to end up being one complete unit. It was anchored to the ground at one corner and sort of left to float so that it would adjust for seasonal temperature variations. These temperature stresses would build up and then finally adjust all at once. The house would just jump, like a small earth quake. I was only there once when it happened, but it was a little unnerving,” Davis wrote.

When Davis worked at the Trigger home, Vernon was deeply involved in solving the looming problem of finding alternative energy. At the time I met him, he claimed to have discovered a way of capturing and transmitting free energy from the earth and was frustrated because he could not sell his discovery to the large energy companies.

Trigger demonstrated his discovery and asked me to extend my hand out into the room. Then he told me to walk slowly toward him. As I did this, a strong tingling sensation was experienced at the tips of my fingers that began moving into my hands and up my arms. As I looked with amazement at him, Trigger began to laugh. “It’s everywhere,” he said.

Just as the great Nikola Tesla claimed perhaps a century before Trigger came along, he said he believed it possible for everyone to enjoy a free flow of energy without having to use wires. He had the solution to this problem figured out, but could not sell it. His plan was to write a book so that when he died, this knowledge would not be lost to the world.

In his letter Davis said Trigger’s lack of the “classical physics education” became a serious barrier between his genius and the scientific community. “He tended to make up his own terms which immediately turned off the (scientists.)” One of the jobs Davis and the other scientists hired to work at the Trigger home that season was to study his work and “translate Trigger Speak into scientific prose that could be understood by the scientific community.”

After years of interviewing people in that community, I have developed a knack for translating that “scientific prose” into terms that can be easily understood by the non-scientific community. Thus I realized that I might be of some help in this project as well.

After getting to know Trigger and being convinced that he was really onto something, I offered to help him write his book. But after this, something very unfortunate occurred. My editor, an ill-placed little man named Bill Florence, refused to print the Trigger story. He apparently thought I made it all up. He threw the story back at me with a note in red ink across the top asking what I was trying to prove. When the story did not run, Trigger lost faith in me. I never was granted another interview with him, and any help I might have given him in writing and publishing his book was lost.

When Vernon Trigger died, many of his secrets apparently died with him. I was happy to discover that his wife, Very, and a team of other researchers, possibly those who worked with Trigger during those last years in Sanilac County, acquired a list of patents that can be found on the Internet. They included:

-- An internal combustion engine system including an engine, timer/distributor device and a compliant electromagnetic device. The engine may have one or more cylinders and includes an anode positioned above a cathodic piston whereby the anode delivers high intense short bursts of electrical energy through the combustion chamber and ignites fuel delivered by an injector.

--An internal plasma-combustion engine system used to operate the above engine.

--The anode for injecting fuel into the engine.