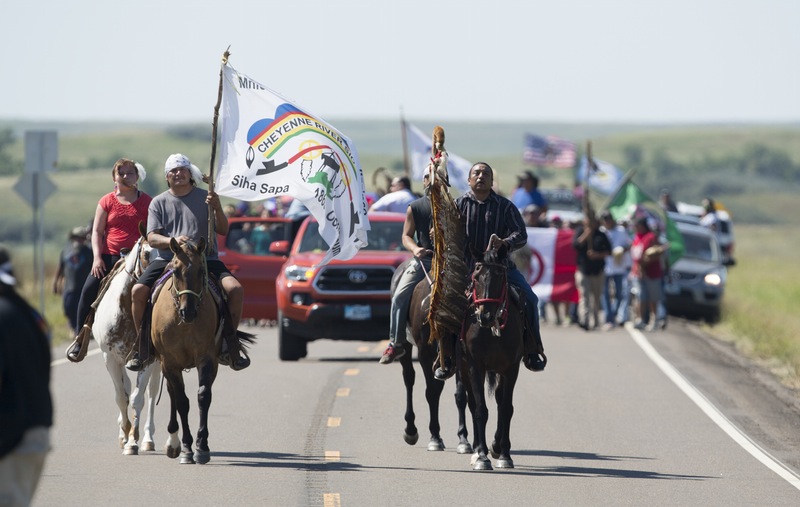 The dramatic demonstration by members of various Native American tribes joining the Standing Rock Sioux Reservation opposing the planned construction of a $3.8 billion pipeline made headlines last week. It was the largest unification of Native American people from across the country that has occurred in decades.

At issue was the question of whether the U.S. Army Corps of Engineers had the right to approve the construction of such a potentially destructive oil pipeline through tribal territory without approval by either the tribe or the U.S. Congress. At question too is whether the decision was environmentally safe for a territory that depends upon local lakes and rivers for its drinking water.

Fortunately the U. S. Department of Justice stepped in late Friday and ordered a temporary halt to the pipeline construction before the state-ordered National Guard faced off against an estimated 1,000 or more tribal members camped out at the construction site.

North Dakota Governor Jack Dalrymple activated the guard even before U.S. District Judge James Boasberg ruled against granting injunction relief in a tribal lawsuit challenging the Corps of Engineers’ decision. The tribe is arguing that the decision violates the National Historic Preservation Act.

What is at stake is the environmental danger such a pipeline for crude oil transfer would create for both Lake Oahe and the Missouri River. A toxic pipeline leak would destroy the tribe’s access to clean drinking water and poison the fish. The tribal protest has been reinforced by a recent pipeline leak that raised havoc in the Yellowstone River. The massive pipelines, designed to move thousands of barrels of crude oil daily from shale deposits found in the Dakotas and Canada, are turning out to be an environmental nightmare when they fail. And oil pipeline failures appear to be making the news a lot since they came into existence.

At stake in the Standing Rock issue is a planned 1,100-mile-long pipeline crossing four states including not only the indigenous lands but the Missouri River which supplies drinking water to about 17 million people. It would be a very large pipeline that would carry up to 578,000 barrels of oil a day.

The Justice Department’s order to temporarily stop pipeline construction has not resolved the issue. It has simply stopped a potential confrontation by the tribal people against the National Guard and North Dakota police units.

It appears that Big Oil is attempting to challenge something the Sioux and other U.S. tribes take very seriously . . . something called tribal sovereignty. They also have a great respect for the Earth and may, if forced, rise up once more and fight to protect the land, air and water as well as their fishing and hunting rights.

It is significant that the Lakota Sioux are not standing alone in this conflict. Numerous other tribes have been arriving on the Standing Rock site since this issue began making national headlines.

The issue of building a pipeline to move heavy volumes of crude oil seems so wrong at a time when world leaders, driven by the threat of severe climate change, rising sea levels and growing crop shortages, are calling for a shift from burning carbon fuels to green energy.

There have been a lot of legal rulings passed down by U.S. courts over this issue of Indian tribe sovereignty. It seems that when the various reservations were created they were declared to be states within the states where they existed. Only the Congress can rule over them and only federal courts can decide legal issues. States appear to have no jurisdiction over the tribes.

When my wife and I lived for a while with a Navajo family in Arizona a few years ago we were privileged to be invited to attend a meeting of a large governing body of people representing the entire tribe. The Navajo Nation is probably the largest reservation existing in the territorial United States. It covers a large portion of Northeast Arizona, northwest New Mexico, and the southern corners of adjoining States of Utah and Colorado. The reservation surrounds the Hopi Nation which is located in Northern Arizona. A map of the Navajo Nation would give it a land mass as large as most of the states in the Southwest.

There exists, however, a strong link between the tribes and the U.S. Bureau of Indian Affairs, which maintains the tribal education system. The bureau also serves as a pipeline for federal food rations and even housing. Even though the homes are scattered, sometimes separated by miles, there exists a water and electric distribution system that appears to have been provided by U.S. tax money.

We also found that the Navajo people maintained a strong allegiance to the U.S. government. They are active in the U.S. military and the Navajo people take great pride in the fact that their native language played a major role in establishing an information code that enemy forces could not read during World War II.

We learned great respect for the Navajo, Hopi and Apache tribal members during our time as residents of Arizona. And we understand the resistance those people are establishing against the construction of an oil pipeline through their lands.
​
It is perhaps ironic that the people who first occupied North America and maintained a sacred love for the land in spite of the European intervention should be leading the fight on the home front to save the Mother Earth. It is obvious by now that our elected representatives in Washington are not going to do it.