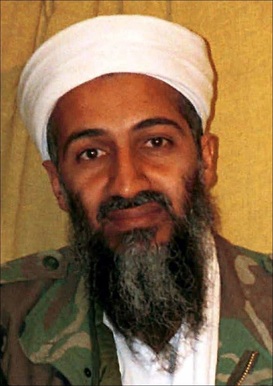 Even though many conspiracy theorists dispute it, Osama bin Laden publically claimed in a video-taped message in 2004 that he and his Islamic terrorist organization al-Qaeda were responsible for the 9-11 attacks on the United States in 2001 that killed an estimated 3,000 civilians.

Bin Laden was, for several years, declared public enemy number one on the FBI’s Most Wanted list. Former President George W. Bush made him a major target in his declared "War on Terror" and the FBI placed a $25 million bounty on him. He was reportedly shot and killed at the age of 54 by a U.S. Naval Special Warfare Development Group and Central Intelligence Agency commandos in Pakistan on May 2, 2011.

Because of the complexities of the Islamic religious groups operating in the Middle East, and the constant intervention by the United States, tracking and reporting the story of Osama bin Laden, and explaining what brought him to do the things he did is no simple task.

Bin Laden was born in Riyadh, Saudi Arabia to a family of billionaire Mohammed bin Awad bin Laden on March 10, 1957. His mother was Mohammed’s Tenth wife. He was the seventh of 50 children born to the man’s 12 wives. He was raised in a strict Sunni sect of the Islamic faith and received his formal education in the best schools before entering special Islamic training under a sect of Islam known as The Brotherhood. There he was trained in the principles of violent jihad, became an Islamic activist, and because he believed in following pure Islamic law he grew his untrimmed beard and wore short pants and wrinkled shirts in imitation of the dress allegedly worn by the Prophet Mohammed.

To have known Osama in those days, one would never have guessed that he would turn out to be the world terrorist leader that he became. He was described as a tall and quiet man who spoke softly and wrote poetry. While attending university, they said he studied civil engineering and accounting. But his main interest was religion. He was deeply involved in interpreting the Quran, and he did charitable work. He also had a keen interest in military theory.
​
Bin Laden also became a political activist. When the Soviets invaded Afghanistan in 1979 he joined the Afghan resistance. While there he began training a mujahideen, a group of Islamic jihadists. It is said the CIA helped finance the resistance movement although Osama personally resisted any help from the United States. He considered the U.S. an enemy of the Islamic people.

Even though he returned to his native Saudi Arabia as a declared "hero" after the Soviet military was driven out of Afghanistan, it was not long before Osama’s political conflicts with King Fahad resulted in Osama being "banned" from citizenship in that country in 1992. For a while he lived in exile in Sudan.

Bin Laden began forming al-Qaeda in 1988. He continued operations in Sudan until U.S. pressure forced him to leave Sudan in 1996. He established a new base in Afghanistan and declared war against the United States. His al-Qaeda group instituted a series of bombings of U.S. facilities in the Middle East.

Bin Laden’s strategy against the United States was to lure the nation into a long war of attrition. He attracted jihadists who vowed never to surrender before the 9-11 attack. The attacks were designed to lead to economic collapse of the United States. In 2004 in a tape broadcast via al-Jazerra, he spoke of "bleeding America to the point of bankruptcy."
​
Although Bin Laden is now gone, his long-range strategy may still be working. The United States is currently locked in what appears to be unending wars against terrorism in the Middle East that are truly bleeding the nation toward bankruptcy.