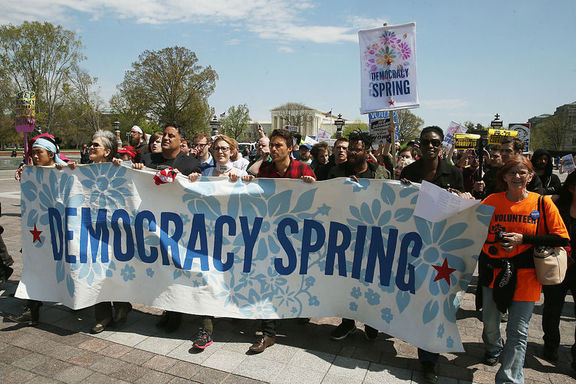 We have tired of the long and drawn-out presidential campaign. It seems that the corporate-controlled media offers a constant barrage of top stories about Republican presidential candidate Donald Trump. The man can't blow his nose without us having to read about it.

We read last week about Trump’s sexual escapades with past wives and the many other women he has known. We also read about his refusal to release information about his income tax records. He makes racial slurs. He insults our neighbors in foreign lands. Every profane word he utters seems to make the front page.

Why is it so important that we know so much about a guy we don’t believe most Americans will vote for in November? Other than a wealth that he inherited, and the fact that he has been hosting a popular but low-class television show, there is nothing refined about the man.

We have heard reports that Mr. Trump isn’t spending a lot on his campaign because he doesn’t have to. The media is doing it for him. No matter if the story is negative news or not, the papers and the national television stations are giving him bundles of free publicity. Michael Calderone recently reported in the Huffington Post that the media have collectively given Trump about $2 billlion in free air time. That alone might persuade a lot of people to blindly vote for him. It involves the art of name association.

What we don’t clearly know is Mr. Trump’s stand on important political issues like how he might deal with international crisis; the massive national debt; the nation’s high unemployment rate; climate change and the ongoing wars in the Middle East.
​
One thing we have to admit. Trump is an intelligent political phenomenon that has found a way to sensationalize his every move and keep news reporters on his trail. But he is not much more than a television personality who inherited wealth and then did a poor job of handling it. He is a frightening causatum to much of the watching world. What makes anyone think he is a viable candidate to be President of the United States?

If you think the corporate media is doing its job by fairly reporting this campaign, consider that Bernie Sanders, who is campaigning against Democratic candidate Hillary Clinton, is drawing large crowds where ever he appears. Clinton doesn’t draw anywhere near the crowd numbers and is carrying some heavy political baggage. Yet she gets media attention. Sanders is usually ignored.
​
When Mr. Sanders gave an important national speech on March 15, all three networks, Fox, CNN and MSNBC ignored it. The talking heads just babbled on about Trump.

What is interesting is that the Internet social links like Facebook are indicating a national rebellion is in the works among the youth, not only in the United States but all over the world. The young adults are angry. They are marching and demonstrating. And they are voting.

In the UK, David Cameron, a relatively unknown Conservative Party candidate who threw his hat in the ring at the last moment, scored an overwhelming victory in an election for the nation’s Prime Minister.

A lot of people believe Sanders might do the same thing in the United States. He is considered a Socialist underdog, an Independent U.S. senator from Vermont, who is proving that a popular candidate does not have to be in the pocket of rich corporations to campaign for the nation’s top job.

Thus the media is ignoring what may be the most important news story of this century. Last month when thousands of activists carried out a 10-day, 140-mile walk from Philadelphia to Washington D.C. and then conducted a mass demonstration in front of the Capitol Building, the event was totally ignored. If you watched the television news that week you probably did not know about it. The story did not appear in any of the major media outlets.

The crowd of activists, who named their event Democracy Spring, stood in front of the Capital for eight days. They conducted "civil disobedience," demanding that legislators “either end the corruption of big money in politics and ensure free and fair elections” or arrest them for “demanding an equal voice.” There were a number of arrests.

The Daily Kos reported Democracy Spring and noted the failure on the part of the national media to report it. The writer of the Kos story noted that “had a fraction of right-wing activists put on such an event, the media coverage would have been incessant.”