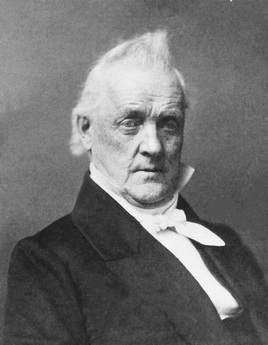 The nation’s fifteenth president James Buchanan, who preceded Abraham Lincoln to office, missed being a “war president” by only a month. Yet it was Buchanan’s actions while in the White House that set the stage for the American Civil War and the deaths of 620,000 soldiers.

It was the nation’s bloodiest war and it was fought by Americans against Americans on U. S. soil.

Buchanan, who served from 1857 to 1861, was heavily engaged in attempting to resolve the issue of slavery that was already dividing the nation. He was from Pennsylvania, a former U. S. Secretary of State, and personally felt morally opposed to slavery. Yet he believed it was protected under the Constitution.

During his term the slavery issue became so heated that seven Southern states seceded from the Union. The question was whether slavery could be banned in U.S. territories, which were only then being settled and slowly establishing boundaries for statehood, or whether the states had the constitutional right to make this decision. It was an issue that boiled down to strong state governments verses the power of a central government.

Northern political interests pressed for either a written law or a Supreme Court decision that banned slavery in the territories. Southern states that already allowed slavery, wanted the matter left up to the states. In spite of his personal feelings about slavery, President Buchanan supported the south on this issue.

Even before taking office, President-elect Buchanan declared a plan to persuade the people to accept constitutional law as the Supreme Court interpreted it. The court was considering the legality of restricting slavery in the territories and Buchanan was helping to stack the deck in favor of the south. In his Inaugural address, he said the territorial question was a matter that he felt the court could settle “speedily and finally.”

It was the Dred Scott case that pulled Buchanan into the turmoil. Scott was a slave suing for freedom. Scott had lived for a time with his owner in a free territory that allowed “limited slavery” under the Missouri Compromise of 1820. The lawsuit was basically forcing the court to decide one way or the other on the compromise. Such a decision would have nation-wide ramifications so it was a hot-button issue.

There were five southern justices on the bench who made it clear they wanted to allow a lower court ruling to stand on the Dred Scott issue and not make new federal law. In the secret wheeling and dealing that goes on in Washington, Buchanan was told that if a northern judge, Robert Cooper Grier, could be persuaded to side with the Southerners, the court would agree to rule on the matter. Thus President Buchanan colluded with the Supreme Court to eliminate territorial barriers to slavery.

It should be noted how the nation today is once again divided over a Supreme Court decision, this time declaring that corporations are people and therefore allowed to contribute large cash contributions to help candidates gain political office.

In a strange reversal of fate, Buchanan was a Democrat while the Republicans gained a majority of House seats. When Buchanan attempted to urge the admission of the Kansas territory as a slave state, he angered the Republicans and alienated members of his own party. Thus Kansas remained a territory and Republicans won a plurality in the House in 1858. After this the government fell into a stalemate. No important legislation was passed.

When Lincoln ran for office in 1860 the Democratic party was so divided that the party was split between Northern and Southern wings, each nominating its own candidate for the presidency. When it became clear that Lincoln would win the presidency, the southern states began advocating succession rather than accept a Republican administration.

Buchanan attempted to deny the legal right of states to secede, but found nothing in the Constitution that prevented it. When southern legislators refused to negotiate for compromise, Buchanan began preparing for military action. He sent reinforcements to Fort Sumter in January, 1861, even as the nation was preparing to accept Lincoln as its new president.

South Carolina seceded at about the time Lincoln was elected and the Confederacy was established before Lincoln was sworn in. The war began about a month after Lincoln began his term.

Looking back over Buchanan’s decision, it is difficult to determine whether anything he could have done in those years would have diverted the looming Civil War. That he forced a court decision favoring the slave states should not have angered the southern states to war.
​
The Civil War was a very dark blot in this nation’s history. More Americans died in that conflict than in any other war fought by U.S. forces. In fact, the death count from that war remains nearly half the total of 1,264,000 American soldiers who have died in all of the nation’s wars combined.