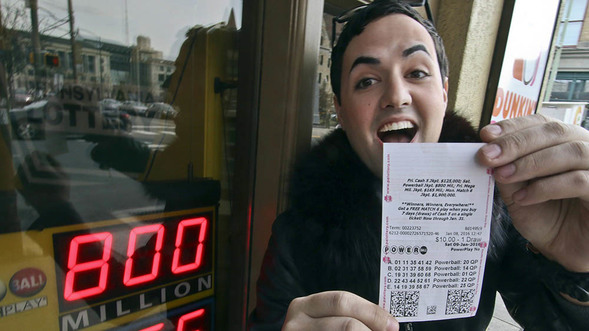 In the wake of all the media hype around the American lottery draw that hit $1.5 billion I feel compelled to report a personal research project conducted while reporting for a daily newspaper in Michigan.

The Michigan lottery was launched in 1972 and had been operating for about 10 years. There had been at least three known million dollar jackpot winners in our reading area, covering Port Huron north into the Thumb Area of the state and west to Lapeer. As a bureau reporter in northern Sanilac County I had been sent to interview them all and capture the shock and joy of having come upon such a fabulous fortune at the luck of the numbers.

A million dollars was a lot of money in 1972. For most of us it still is even though it now takes that much just to buy a modest home in some cities.

The first winner I met was a man that really needed the financial help. He and his wife and their band of small rug rats were packed in a small rural house on a dirt road not far from the old ghost town of Richmondville, an old lumber port along the Lake Huron shoreline. I think he was either unemployed or the family was living on the meager wages earned by either the husband or wife at some low-paying job.

The problem with this story is that the man who won the million was a heavy drinker. Either at the time he bought the winning lottery ticket, or possibly after learning that it was a winning ticket, he promised a bar-buddy that he was going to share his winnings. That fellow suddenly became his best friend and stuck with him until the money was awarded. He was at the house to share in the newspaper interview.

The second winner was a railroad employee that managed a depot at Pigeon, Michigan, that served either the old Grand Trunk or C&O Rail lines, both of them still operating in the 1970s. He was an older man who lived in a modest home with his wife. Their children were grown and out of the house. He said he planned to pay his bills, buy a new car and build a new house with the money. Beyond that he said he had no plans.

I believe the third winner was a woman. I don’t remember much about her because I had to travel to the Michigan lottery office to meet her when she showed up to claim her fortune. All I remember was that she seemed confused about what to do with the money and had a problem dealing with all of the publicity she was getting.

A few years after these people fell into their lottery wins, my editor asked me to return to these homes and do a follow-up story on how those million dollar jackpots changed their lives. The assignment turned into an interesting sociological study.

Two of the winners, the Richmondville family and the woman I met at the lottery office, had been unable to personally deal with so much money. Their lives were riddled with disaster. In both cases I found divorce and a general destruction of the family unit. The Richmondville yard was filled with expensive vehicles including a motor home and fine boat on a trailer. The two buddies that planned to share the winnings had been locked in a court battle and the lawyers acquired most of the money.

The Pigeon train depot manager’s life was almost unchanged. He was still on his old job, going to work faithfully every day. He followed through with his plan. He paid his bills, built a nice new home and bought the new car he wanted. The rest of the money was tucked away in the bank drawing interest. He didn’t seem to know what else to do with it. Among the three winners, I found him to be the happiest.

All three families found themselves plagued by “friends” asking for money, and hucksters attempting to swindle them.

The story I wrote focused on the impact sudden wealth can have on people who were not prepared to deal with it. I noted in my story that million dollar lottery wins were not the road to happiness and for the average hard-working family, at least in our area, they had turned out to be a ticket to disaster.

The story was slated to appear in our Sunday edition. I happened to be working at the office the preceding Saturday night and saw the edited version of my story as it was slated to appear the next day. I was shocked to discover that my editor had completely rewritten the story, changing all of the facts. The new story suggested that all the money had generated lives of joy and happiness.

Naturally I blew my stack. I confronted that editor about the way my story had been changed. This man, a young and inexperienced man with a masters degree in journalism, refused to believe all that money could bring so much suffering. I told him the edited story was a lie and that I did not want my name attached to it.

The story ran as the editor wanted it to appear. My name did not appear with it. The people of the area were fed a big lie.
​
This was perhaps my first exposure to the new journalism that was pulsating throughout the American media. I think it was after this incident that I began losing my faith in what the media was telling me.