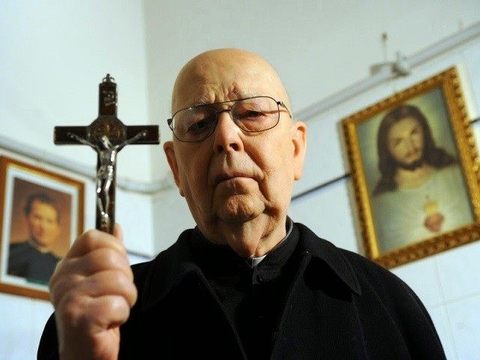 Catholic Priests Exorcising Something, But What?

Roman Catholic priests have strangely returned to the ancient rites of exorcism because of what they claim has been a flurry of demonic activity in the world.

Based on what we now know about the angelic and demonic spirits that live among us, the stories seem somewhat unlikely.

People who know about such things say that while both angels and demons can “possess” humans, their influence is so subtle that the host rarely is aware of the possession. It is not the kind of wild overpowering of the soul depicted in Hollywood films.

Yet there have been stories like the one involving a priest in Toledo, Ohio, who claims he has been kicked, bruised, choked and spit upon by demon-possessed people during his years of battling possessions. We suggest that this priest has hypnotized his subject into believing he or she is overpowered by something sinister, he has been dealing with insanity, or he is making the whole thing up.

The ritual performed by priests accomplishes very little when it comes to removing a spirit from an individual. This is because the priest can be blinded by religious beliefs and believes that the “holy” water, the cross and the words in the Holy Bible are such powerful symbols they effectively ward off the evil spirit in the room.

This writer and his associates, many of us fully aware of the influence of outside forces, have discovered a few simple things concerning the way these entities work and “possess” human spirits.

Most people are possessed in one way or another much of the time. Getting rid of the “waywards” and other external forces that quietly attach themselves to us, usually involves an awareness of their existence and a personal command for them to leave. Some of the more powerful forces must be identified by name and it usually takes a second person with the skill of a true exorcist to get them to leave.

Rather than set them loose on the world to attach themselves to another human, the proper way of disposal is to send these entities on into the light where they can do no further harm.

Being possessed by such beings is so subtle we do not sense their existence. They can, however, cause us to do things against our will, act in unnatural ways, and even affect our health if allowed to hang on for too long.

The important thing for us to remember is that we are created superior to the entities that fly around us in the spirit world. While they might attach themselves to us, they cannot totally “possess” our spirit. We have the power to demand that they leave and send them on their way.

It is believed that some humans may exist without souls. Also many humans are now discovering that we all have the capability of leaving our bodies at will and visiting the astral world that surrounds us. It is believed that when we leave the body, or when there is an absence of a soul, the body is ripe for possession by a demon or other outside force.

This is why the late Robert Monroe, founder of the Monroe Institute at Faber, Virginia, which teaches ways of leaving the body, also taught his students to first create an invisible protective balloon around the body before leaving it. This, he believed, protected the body from possession while the owner is out exploring.

Whether Monroe was right or wrong in his theory, we find it comforting to create the balloon every time we decide to go flying. At least we do it during our awake hours. I have always suspected that many of us fly at night while asleep and dreaming. And I don’t think anyone bothers to post a balloon or any other protective guard at the gate when we are snoozing.