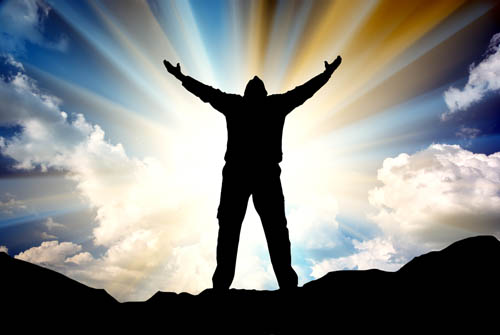 Tapping Into The Light Of The Soul

In our past encounters with the Hindu Master Sai Maa and the spiritual entity identified as The Abba Father, we have noticed a common thread in the information received . . . there is a need for humans to learn to tap into a light, or an energy source that has always been within our grasp, and prepare for a major dimensional shift that is soon to occur.

The Abba Father says the light has always existed for us but we need instructions on getting it activated so we can be prepared for the change. “Humans contain so much light they are capable of becoming gods,” this entity said. We are instructed to mentally go within, envision opening every cell, and in this way turn on the internal light so that our resonance increases. We will know that we have been successful because we will feel the power like sparks at the tips of our fingers. If you can see auras you will actually see the light coming from your fingertips.

In our time with Sai Maa we were taught how to open an inner power the Hindus call chakras, receive a power of light known as a transpersonal chakra located just above the head, thus awakening the “I Am” presence, or god within. Indeed, when we as a group collectively raised our arms with open hands and mentally thought of drawing in this power, we began to actually feel a tingling in our fingers, which we then used like power light beams to heal. I am a personal testimony that some kind of energy was switched on within me during that session.

So just what is this light that we are talking about? Ellie Crystal, who maintains a collection of esoteric information in her Crystal Links web site, states that the Hindus believe the highest transpersonal chakra is sometimes called the Soul Star. She writes: “Our souls are sparks of light, the little twinkling lights you see from time to time out of the periphery of your field of vision.”

Astrologer Risa D’Angeles, who publishes a regular and amazingly accurate astrological column in various California newspapers and on the Night Light News web site, seems to agree with the Hindu interpretation. She writes that “the soul is a five-pointed star six inches above the head of an individual. Acting as a bridge it hovers between form (our bodies) and essence (Spirit). The soul is not spirit. The soul purifies the personality for the entrance of spirit. When a strong personality is cleansed, the soul departs and spirit enters the body.”

The late esoteric author Alice A. Bailey, described the soul as “a frequency of divine energy or consciousness, dropped down from God the Father into a state of semi-dense physicality. While still maintaining its connection to Spirit, the Soul suspends itself above the life of every human and waits until the personality has developed both experience and strength enough to withstand the incoming fiery light the Soul will bring to the individual.

“When the personality is strong enough, the Soul detaches itself from God the Father and descends into the life and personality of the individual. From that point on, the personality takes on a new enlightened character because of the Soul’s influence. This descent is what is meant by ‘the light of life itself (that) ends forever the darkness of matter,’” Bailey wrote.

She went on to explain that there is something called the Rainbow Bridge, or a silvery cord that links the personality with the Soul and brings light to the darkness of matter. “Each individual has the ability to activate the process of the Soul. This is done out of, and through, the substance of the developed mind,” Bailey wrote.

To develop the mind enough to receive this light, or Soul, she said “one must first have the aspiration to know, actively study the Ancient Wisdom teachings, and then employ the techniques of invoking the Soul through pure intention and active visualization.”

This is exactly what Her Holiness Sai Maa, and The Abba Father are teaching us in these end times. It appears that the human race was supposed to have evolved to do this on its own many hundreds of years ago, but became so bound up in religiosity and dogma that we failed in our spiritual growth. This may explain why the advancements in science, industry and other fields have been going so amiss. Most of humanity has failed to link up with its soul, which continues to wait patiently for us to not only be worthy of it, but understand just what and where it is.

As Sai Maa explained, many masters that included the Buddha, Mohammad, Krishna and Jesus have come among us over the years with the message to get us back on the right spiritual path. Instead of receiving and understanding the message, we made gods out of these people and created religions around them. It was the very thing they did not want us to do. Now there is an urgency to get at least a remnant of humanity to wake up in time to be ready for a major change that is about to occur.

This change will not be a “second coming” of a savior and a great Battle of Armageddon, as the Christians teach. We are, however, about to go through chaos as the world turns itself upside down and inside out and then carries those of us who are prepared for it into this new dimension.
​
If you are conscious and watching news events these days, you must be aware that the chaos is here. We must open our hearts and minds, receive the light and hold on for the bumpy ride ahead.