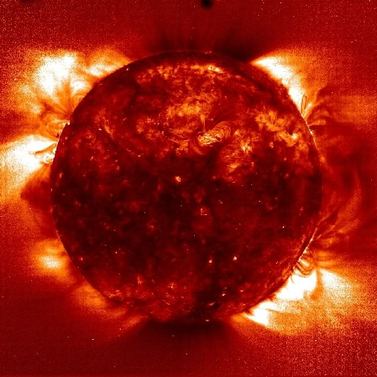 We have already established that the Sun’s storms issued from the dark spots that appear at intervals have been on the increase after an unusually long quiet time. Scientists who study the Sun say there are changes in the way the Sun is behaving and they do not understand why this is happening.

It was established by a team of Swiss and German scientists at least a decade ago that the sun is burning hotter than usual. Sami Solanki, director of the Max Planck Institute for Solar System Research in Gottingen, Germany, said the team determined that "the sun has been at its strongest over the past 60 years and may now be affecting global temperatures.

"The sun is in a changed state. It is brighter than it was a few hundred years ago and this brightening started relatively recently – in the last 100 to 150 years," Solanski said.
So is the warming sun the cause of the earth’s heating and the subsequent climate changes?

Climatologist Bill Burrows, a member of the Royal Meteorological Society, said Solanski’s research "shows that there is enough happening on the solar front to merit further research. Perhaps we are devoting too many resources to connecting human effects on the climate without being sure that we are the major contributor."

Solanki and most other world scientists are in agreement that the heating sun, alone, is not the only culprit behind the radical climate changes we are experiencing. They still argue that the build-up of greenhouses gases carbon dioxide and methane are a primary cause, and perhaps magnified in their intensity by the hotter sun.

He said the increased solar brightness over the past 20 years has not been enough to cause the changes in our climate, but suspects that the impact of that intense sunlight on the ozone layer, cloud cover and the build-up of greenhouse gases in the atmosphere is related.

Another researcher, David Viner at the University of East Anglia’s climate research unit, said he finds that increases in sun spots is in some way effecting global warming. But while the number of sunspots remains roughly constant, the Earth’s temperature is continuing to rise. This suggests, Viner said, that human activities such as the burning of fossil fuels and deforestation have impacted "the natural factors involved in climate change."

A report to the International Astronomical Union General Assembly in Honolulu, Hawaii in 2015 strongly suggested that the Sun is not burning warmer and that it has had nothing to do with climate changes occurring on the Earth.

Frederic Clette, Director of the World Data Center SILSO; Ed Cliver of the National Solar Observatory and Leif Svalgaard of Stanford University told the assembly that an error was found in the system used in measuring sun spots and solar activity for the last 300 years and that the revised count actually shows the Sun burning cooler now than in the past.

The report appeared to nullify a claim that there has been a Modern Grand Maximum occurring on the Sun. Thus it appears that nobody really knows or understands what is going on in the heart of that big ball of fire at the heart of our solar system.

Astronomers know that our Sun, like all of the other suns in our galaxy, is a star. And by studying the stars they know that the brightness of all suns varies. They go through cycles and eventually burn out. The process, however, continues for billions of years so the chance that our sun is entering its final stage is probably nothing to worry about. But the changes in brightness may also mean changes in generated heat, which would account for periods of heat and drought, and ice ages.

There is a belief among the aboriginal people, perhaps dating back thousands of years, that the earth and sun, like all of the suns and planets in the universe, are sentient beings and part of a single living consciousness, which is the Creator. Many contemporary spiritual thinkers who have turned away from the tread-worn religious systems, are also considering this concept. If this is correct, then is it possible that the sun and the earth are working in concert to repair the damage caused by an overpopulated humanity on this planet?

While humans, like the ancient dinosaurs, may be forced by climate change and a heating earth to go into extinction, the Mother Earth will live on. Since she is a life force, and affected by the life forces in the surrounding universe, a new world filled with vegetation and living beings of her creation could evolve, as it appears to have done many times in the distant past.
​
In conclusion Mr. Sprat, it seems that changing solar activity may or may not be a factor in your list of concerns.