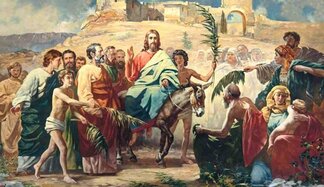 Jesus And The Donkey

The four gospels of the New Testament depict the life and ministry of Jesus from four different points of view. But for some odd reason they all tell us how Jesus entered the City of Jerusalem for the last time riding on a donkey.

Why was this strange little story important? It was because the Old Testament prophet Zechariah said that when he arrived, the long-awaited messiah would ride into Jerusalem on a donkey. Even though Jesus never claimed to be the messiah during his reported ministry, the writers of all four Gospels used this story as a proof of identity.

In the gospel stories Jesus told his disciples to find a donkey and bring it to him. It says nothing about where the donkey came from, or whether its owner was willing to let Jesus have it for his odd ride into town.

Contrary to contemporary Christian belief, the gospels of Matthew, Mark, Luke and John were not written by the apostles who supposedly shared a personal relationship with Jesus. Thousands of ancient stories about Jesus have been found in the ruins in or around the so-called "Holy Land," but none appear to be text penned by these four men.

In fact, the King James Bible, the version most accepted as the "Word of God" by fundamental Christian believers, was drafted for the King of England in 1611 by an appointed committee of eight religious scholars from the Church of England. These men drew from an estimated 8,000 Fourth Century documents that contained various stories about the life of Jesus found in scrolls drafted by unknown writers who lived during the First Century.

Thus these first-hand accounts of how Jesus lived and what he said and did were nothing more than fabrications of the Jesus story designed to please King James. Even if these eight priests and holy men were making a sincere effort to produce an accurate record of the life and ministry of Jesus, their methods of research were obviously flawed.

Thus the donkey story, which appears in all four gospels, may have originated from the Book of Zechariah, which was among the documents to be examined. It was a crude way for the committee to attempt to prove to the church that Jesus was the authentic messiah.