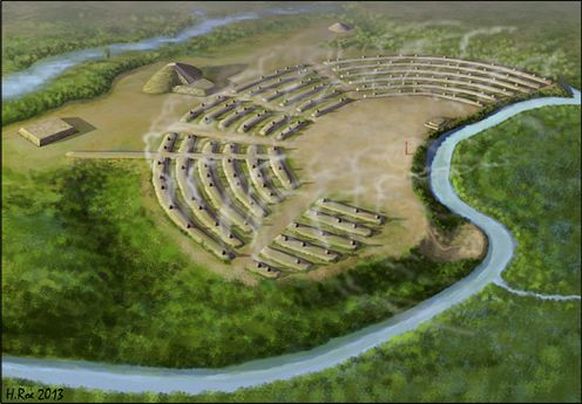 The North American continent is filled with earthen mounds, some of them very large and some hide secret things of the ancient past. Among them are a cluster of large mounds found along the Macon River in Northeast Louisiana that are known as Poverty Point.

These ancient earthworks cover an estimated 500 acres. Within this area is a group of six concentric, crescent ridge earthworks divided by five aisles radiating from a central point located at the bank of the river. Also found are large mounds located both within and outside the ring. Archaeologists have determined that the mounds do not appear to hide buildings or burial sites. But there is an area about three miles long where there is evidence of tribal occupation at some time in the distant past.

The mounds range from about 25 to over 50 feet in height. It is estimated that it would have taken years for workers to carry enough soil to erect such massive earthworks.
​
Radiocarbon dating at the site has shown that the earthworks were indeed constructed over long periods of time. The earliest mounds were built some 1,800 years BCE. The work on the site apparently continued until as late as 1200 BCE. Thus the building of these large earth mounds involved many successive generations and it appears that the same tribal people occupied this area throughout this time period.

Because these earthworks appear to be as ancient as the Great Pyramids of Egypt and other great monuments of the world, Poverty Point has been among the few in North America to be selected as a World Heritage Site.

The site is named for a plantation that once existed on the grounds.

Archaeologists, who have been digging at the site for the past 100 years, have uncovered a variety of tools and pottery. Some items, including copper pieces, appear to have been imported from as far as the Upper Peninsula of Michigan, thus suggesting that very early trading was occurring among North American tribal groups.

There has been debate over the functions of the Poverty Point mounds. While some areas were settled, the reason for the construction of the large mounds in the interesting shapes has been a puzzle. There were perhaps only two other examples of this kind of artistic mound building on the continent; the massive snake mount in Ohio and the Garden Beds found throughout Lower Michigan by the early settlers. The Michigan Garden Beds were smaller mounds shaped in a variety of patterns and sometimes covering many acres. They had to be observed from the air to be really appreciated. Fortunately the beds were researched, recorded and drawings made before agricultural interests destroyed them.

Unfortunately, more contemporary farming caused significant damage at the Poverty Point site before historians and archaeologists took a close look at what was located there.

Some post holes were found on the Poverty Point mounds suggesting that buildings once were placed on top of them. Thus there has been a theory that homes, or possibly religious oriented structures were once placed there. A large post hole found in the central plaza has shown that a large post was once located there. Archaeologist William Haag, who excavated the site in the 1970's, proposed that the posts, and especially the central plaza post, may have been there for astronomical purposes. Before there was artificial light and smog the stars were clearly visible in the night skies. Thus it was common for the ancient people to look up, examine and worship the the many night lights above their heads.
​
In 1962 Poverty Point was designated a National Historic Landmark and in 1988 Congress marked the site as a U.S. National Monument. In 1972 the State of Louisiana purchased a 400-acre portion of the site and built a museum. Poverty Point National Monument is now opened as a tourist attraction.