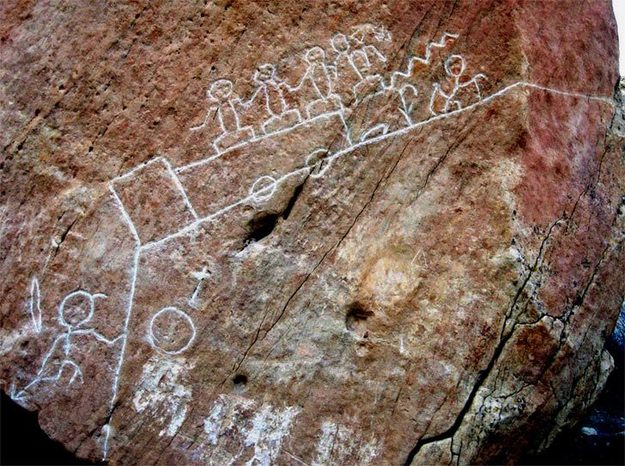 When my wife and I went among the Hopi people in 1997 we befriended a two-horned priest who introduced us to one of the last six living tribal elders. We were privileged to have been taught and shown things that outsiders rarely, if ever, get to see.

Before our arrival I poured over all of the books and written material available about the Hopi culture, including Frank Waters’ The Book of the Hopi that was filled with historical information and, most importantly, Hopi prophecy.

Theirs is a complex story that is not easy to grasp. In fact, the Hopi are known for their secrecy in revealing their religious beliefs, their history and just who they believe they are. In essence, the Hopi appear to teach that they are an original people brought to this world, or what they refer to as The Fourth World.

The Hopi believe that Tawa, or the Sun Spirit, created the world. Another powerful deity, Spider Grandmother acts as an intermediary between the Creator and the people. And Skeleton Man, or Masauwu, is keeper of the Fourth or Upper World.
​
The Two-Horned Priest, Ted Kootsawatewa, was, among other things, a Kachina Dancer. He showed us various masks and costumes that he wore for a variety of tribal dances held throughout the year. The Hopi live high on the top of three large mesas on the Hopi Reservation in Northern Central Arizona. Their homes are bleak huts made of clay brick from the ground. They live on corn and other vegetables grown on small plots of ground some distance away from the mesas, located on the dry and desolate high desert. They walk for miles each day to tend to these gardens.

Ted’s role as a two-horned priest was to attend to the dead. He searched out the tribal members after their deaths, dressed the bodies with special ornaments and feathers, said traditional prayers, and then disposed of the bodies the aboriginal way. While the Hollywood films depicted Indian tribes putting bodies on platforms and letting the birds consume them, we had reason to believe the Hopi may actually bury their dead. We were never told.

There has been a key story passed down by the elders that the Hopi were sent into this desolate and dry area so that they would learn to live and survive on very little, and to learn to have reverence for the Mother Earth, who provides for them. Indeed, when Ted Kootsawatewa once spent a night at our home in Sedona, he was up at dawn to welcome the morning sun. And when my wife prepared a breakfast of eggs, sausage and toast, Ted went out of the house with his plate and gave a portion of his food back to the Earth for the animals and insects to eat.

He told us Hopi people only eat one meal each day, and this is usually a dry rolled-up concoction of corn bread and other vegetables that they carry with them to the field when working on their gardens. Their bodies have adapted, he said, to the dry arid land, and they do not require a lot of food and drink to survive. In fact, Native Americans that fall into the American way of living, and eat three meals a day, quickly become very fat.

Ted invited us to attend various tribal dances, introduced us to one of the surviving Elders of the Sun Clan on the Third Mesa, and revealed many of the sacred places, including the place where Spider Grandmother was believed to live. He also showed us ancient rock carvings that told stories of the Hopi past, which, from the stories I found, made me believe they were linked to the ancient Anasazi, or pueblo people of Northern Arizona and New Mexico, and may have even been descendants of the Aztecs of South America.
​
Among the carvings we were shown was the well-known petroglyph known as Prophecy Rock. The carving is a simple art work, as are most of the Hopi rock carvings and paintings on stone. But this particular art work, which is depicted above, is filled with symbolic meaning and prophetic messages. The carved images are highlighted to assist us in examining the message.
​
The large human stick figure on the left is the Great Spirit. There is a bow at his left hand lying flat, an instruction to the Hopi to lay down their weapons and live in peace. A vertical line to the right of the Great Spirit is said to be a time scale in thousands of years. The Great Spirit is touching the line to show the time of His return.

There are two life paths leading off from the time line. The lower line represents a narrow path of continuous life in harmony with nature. The wide upper path represents the white man’s scientific achievements and influence on humanity. The bar linking the paths, above a tiny cross at the bottom, represents the arrival of the white men in North America. The cross, of course, represents Christianity.

There is a very small circle at the bottom of the carving, right next to the time line, said to represent the continuous Path of Life, which occurs no matter which path we take.
Some say the four stick figures on the upper road represent the four worlds that the Hopi have experienced. Another interpretation is that it is a prophecy that the Hopi will be seduced by the white man’s ways and follow the wrong road.

There are two circles on the lower path. It is said they represent a great shaking of the earth and may mark World Wars One and Two. The swastika in the sun, at the far left, and the Celtic cross on the far right represent the two helpers of the Pahana, the true white brother who is expected to return at the end of time and guide humanity through a looming purification.

Notice that at the end of the straight upper line, there is yet another line connecting to the lower path. This it is said, is the final chance for the people to turn back to nature and their old ways before the upper road disintegrates into a twisted ruin.

Immediately after the last chance line, a small circle on the path marks the Great Purification. This is the point where the Hopi and many contemporary prophets and seers around the world believe we are living today.
​
Notice that after the purification, the Hopi message is that corn will grow in abundance when the Great Spirit returns and the Path of Life goes on forever.