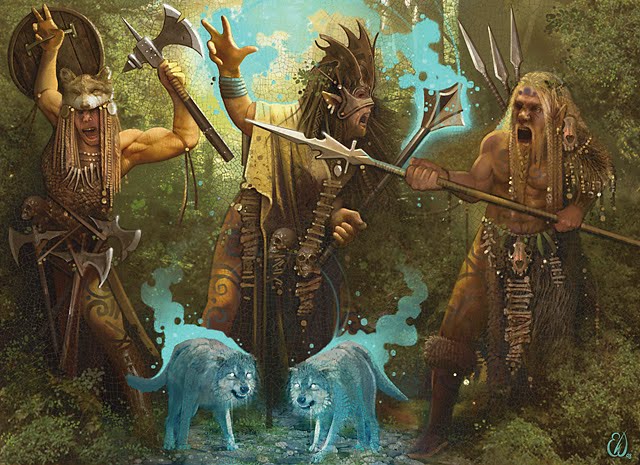 Are Irish Roots Older Than Sumeria?

They were the Tuatha De’ Danaan, an ancient supernatural race in Irish mythology that were described as tall, fair skinned with green eyes and blonde or red hair. They ruled over Ireland at least 4,000 years ago and there is some thought that they appeared either before or at about the same time as the great Sumerian Nation appeared.

Could there have been a link? Were they both the result of alien intervention at about the same time in Earth’s ancient past?

There is a poem in a very old text known as Lebor Gebala Erenn (The Book of Invasions) that tells how the Tuatha De’ Danaan arrived in “flying ships” surrounded by “dark clouds." They landed on The Iron Mountain in County Leitrim and “brought a darkness over the sun lasting three days.”

Some scholars believe the tribe originated in Norway but archaeologists have found human remains in Xinjiang Province, China and Egypt of humans with red and blonde hair dating back to about the same time the Tuatha De’ Danaan arrived in Ireland.

Legend has it that Ireland’s Hill of Tara was the prehistoric home of the Tuatha De’ Danaan, a magical tribe that displayed amazing powers and some say were linked to the “Shining Ones” or the Elohim. Irish mythology dates arrival of the Anunnaki to an estimated 1,000 years before the Sumerian civilization appeared.
​
Their story tells how Enki, the first entity to arrive from other worlds, settled first in Ireland before his followers founded a civilization in Sumeria about a thousand years later. Strangely, the story fits the strange tale found on ancient clay Sumerian clay tablets. The tablets talk of an exiled king of the wandering planet Nibiru who traveled to Earth in search of gold. After finding gold he send word back to Nibiru and a delegation of aliens followed him to Earth and began mining the gold.

The span of time between the arrival of the first Anunnaki and the second delegation was about a thousand years. It took that long to make the trip. It appears that the Anunnaki enjoy very long lives.

The late author Laurence Gardner, known for his concepts of "alternative history," points to the mythology behind both the Tuatha De’ Danaan and Sumerian cultures and notes that the Sumerian culture coincides with the early Irish. It's as if one culture is the continuation of the other.

In old Ireland the people were known as the Ari, or Ari-ish, which has evolved to the word Irish. Ari-Land then became the home of the Aryan race, the blond haired, blue-eyed original race so prized by Hitler and the Nazi Party in the 1930's.

The very word Aryan is a Sanskrit word that means "noble." Gardner puts forth the proposal that the original alien, recorded as Enki, or E.A. conducted DNA experiments in Ireland to produce the Ari people. The Ari were given great wisdom and were ranked below the Illi gods but above the people.

When the Sumerians came into play, it was Enki's half-brother Enlil who used the DNA laboratories to produce slave workers for mining gold. He sought to keep humanity "at the level of a dim-bulb."

Thus legend has it that Ireland was the "Great Motherland of the Aryan race." The place also bore the names Thule, and some believe it may also have been the real Atlantis.
Did E.A. choose to separate this new human from the others in Sumeria, placing them on an island home remembered as Atlantis. Could he have been the Pa-Tara (father) or the Poteidon (Poseidon) or Lord of Wisdom?

It has only recently been discovered that the ancient Hill of Tara, long considered a sacred place among the Celtics, rests over an ancient temple. According to legend, that hill was the place from where the kings of Mide ruled Ireland.

The ancient tales tell how the Danann fought against an existing tribe of small people known as the Fir Bolg. It was known as the First Battle of Moytura. Historians believe there were two major battles, the second of which led to the defeat of the Danann by the Gaels.

Archaeologists are only now beginning to dig into the grounds below Tara. There is a thought that the answers to these and many other questions about humanity's past might be found there.

Much of the known history of the Ari, the Gaels and Celtic people who came later, and the sacred teachings were virtually destroyed when the Church of Rome launched its campaign with an iron fist that swept the British Isles. The English priests rewrote the history of the region. As one writer so skillfully described what happened: They performed "a full-scale perimeter mythic wipe-down of Tara that left it a sunken wreck - physically intact, spiritually destroyed."

Ironically the yearly celebration of St. Patrick's Day is a recognition of a time when the people of Ireland were led from their ancient spiritual ways into the slavery of Christianity.